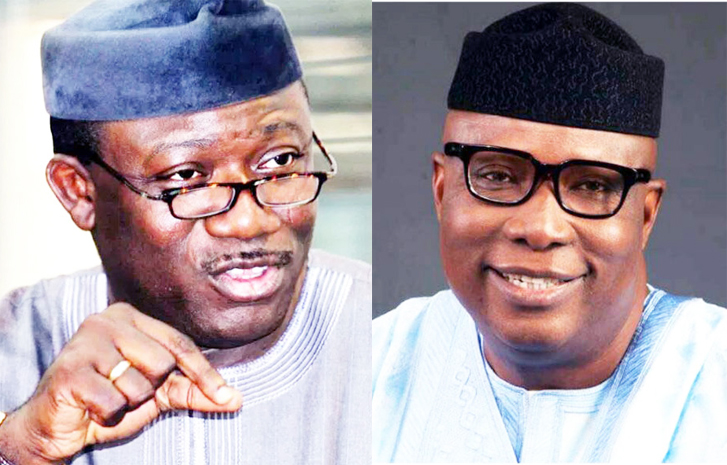 The bridge of confidence amongst major players within the ruling All Progressives Congress party in Ekiti state has attracted the attention of the party’s National Secretariat in Abuja, TopNaija reports.

All Progressives Congress has since set up a five-man reconciliation committee under the chairmanship of Kaduna State Governor, Nasir El-Rufai.

Although opinions are divided about the root cause of the crisis, there appears to be a consensus that the battle for the control of the party’s structure ahead of the 2022 governorship and 2023 general elections, cannot be ruled out as the reason for the protracted problem.

At the centre of the dispute are Governor Kayode Fayemi and his loyalists on one hand and the Special Adviser to the President on Political Matters, Senator Babafemi Ojudu, and his supporters on the other hand.

After several months of speculations, the Paul Omotoso-led state executive council of the party announced the suspension of Ojudu; Oyetunde Ojo, an in-law of the APC National Leader, Asiwaju Ahmed Tinubu, and nine others.

Shortly afterwards, Ojudu and his supporters also announced the suspension of Governor Fayemi and the state party executive.

Almost immediately, the Deputy National Publicity Secretary of the party, Yekini Nabena, in a statement titled “Disclaimer: Governor Fayemi, Other Purported ‘Suspensions’ a Nullity – APC,” dismissed both suspensions and described them as a nullity.

However, an Ekiti-based political analyst, Taiwo Ademuwa, described the conflict as a carryover from the party’s 2018 governorship primary.

He said most party leaders had picked their preferred candidates before Fayemi joined the race and that “when Fayemi came, he was able to defeat them or their candidates. That was the genesis”.

“Senator Ojudu was an aspirant before he withdrew on the eve of the rescheduled primaries. Senator Adeniyi supported the ambition of former Governor Segun Oni, it is politics. It is not as a result of 2023, but a matter of leadership of the party in the state,” he added.

An aide to Fayemi, Dauda Lawal, who gave a historical perspective to the crisis, said, “The issue has been on since the day Fayemi lost his re-election bid in 2014. Immediately after the loss, there was the issue of who controls the party structure in Ekiti State. “So, there was a battle line between members of the Ojudu group and that of Fayemi.” Lawal explained that Ojudu and his supporters felt since Fayemi lost his re-election bid, he should automatically lose his position as the state APC leader.

The governor’s aide also hinted that the calculations made by members of the group who were bent on producing Fayemi’s successor in 2022, could not be ruled out. According to him, it is an open secret that members of the group have started rooting for Tinubu, who is believed to be nursing a 2023 presidential ambition.

He alleged that those persons were under the impression that they could only succeed by whittling down Fayemi’s influence within the APC. On his part, a former Deputy Governor of the state, Chief Abiodun Aluko, has said the conflict is multi-dimensional and will require tact to resolve.

Aluko said, “Those who have interest in contesting for governorship in 2022 or those eyeing seats in the national or state assemblies in 2023, believe their ambition has already been truncated if they are not part of those running the affairs of the party.

“That is their own belief and they are fighting back because there is nobody who is in politics because of the interest of another person. Everybody has their own interest and they believe that their interest is going to suffer some jeopardy come 2022, 2023 if they are not part and parcel of the decision-making process.

“Some people are also saying the 2023 presidential election has a lot to do with this. In a way, it has. We know that there are two principal actors in the South-West. One of them is from Ekiti State and he wants to hold the state firmly and ensure that he is in control and another one is from outside Ekiti State, and he wants to have an inroad and make sure that he can get on his side as many leaders and delegates as possible.

“So, everybody is trying to create an empire for themselves and people are being lured with mouth-watering promises or positions. A lot of things are happening. But from my own point of view, I believe that we should try and preserve what we have in Ekiti State for now and make sure that we do not play into the hands of the opposition. We must ensure that we put an end to the current situation of having the APC and the Peoples Democratic Party leaving the government for each other.”

But the Secretary for the group of aggrieved APC leaders and former Ekiti State House of Assembly member, Femi Adeleye, has a different perspective.

Adeleye said, “It is not about 2022 when Ekiti State governorship election will be take place or 2023 when the presidential election will hold. It is about the right thing. I don’t know why people tag this as Ojudu versus Fayemi fight.

“In our group, Dr. Wole Oluyede, a medical doctor of international repute, contested governorship ticket in 2018, Bimbo Daramola contested in the 2018 governorship primary election, and former governor, Chief Segun Oni, who was a member before he left the APC in annoyance for the PDP, contested for the ticket as well.

“We are saying that where there is no fairness and justice, there can never be peace. The simple thing we are asking for is that they should follow the party’s constitution. The constitution says ‘we shall have congresses to elect ward executives, local government executives and state executives.’ In Ekiti, it was not so. In the first instance, they handpicked the state executive council before they even picked the ward and local government executive council.

“We did not start this thing today, we started in September 2018. We challenged it and wrote to them at the national level. It was when nothing changed that we went to court. It is not about governorship or presidential election.”

Reacting to some of these claims, the state APC Publicity Secretary, Ade Ajayi, denied the allegation that members of the executive council were handpicked.

“Nobody is fighting over whether Tinubu or Fayemi is contesting. When the time comes, the party will look into that. As far as the APC in Ekiti is concerned, it is a distraction. Our focus is how the party in Ekiti will succeed itself at the end of Fayemi’s tenure in 2022.”

Ajayi, who expressed confidence that the El-Rufai-led panel would succeed, appealed to the aggrieved party members to remain calm and cooperate with the party to develop the state.

In response, one of the aggrieved party leaders, a former Speaker, Ekiti State House of Assembly, Dr. Adewale Omirin, said “For now, what is happening in Ekiti State is not related to 2023 presidential election. What we are fighting for in Ekiti State is that the party’s constitution was not followed in the constitution of the state executive council – that it was constituted in a private home.”

He explained that he and his colleagues were prepared to cooperate with the El-Rufai-led committee, but that they were awaiting a judicial pronouncement on the matter.

The former lawmaker said, “What we are looking for is peace in the party. We don’t want the APC to lose elections. We don’t want a situation that will allow the PDP to take over after the APC. We are out to save our party from what happened when former governor Ayodele Fayose drove PDP leaders away. That was why the PDP could not win the last election because all the leaders worked against him.”

Speaking on the issue, the APC State Director of Media, Sam Oluwalana, said, “Those who say that what is going on is about 2023 are just being mischievous. Has the governor or anybody within the APC in Ekiti State or anywhere said that they are contesting in 2023?

“Nobody has said that in Ekiti APC or in any other state as far as I am concerned. When they started APC Action Group which they had in the past, was it about 2023 presidential matter? When they refused to support the party in the last governorship election, was it about 2023 issue? They are just being mischievous; the truth will come out.

“Nobody wants all these problems; we would rather have a united family – one indivisible united family. That is why we are reaching out to them so that they can come back. These people are in the Diaspora; none of them lives in Ekiti or comes to Ekiti. They stay outside and throw stones at their homes from there.”

As the two warring groups are unwilling to yield grounds only time tell whether or not the El-Rufai committee will succeed in its assignment.