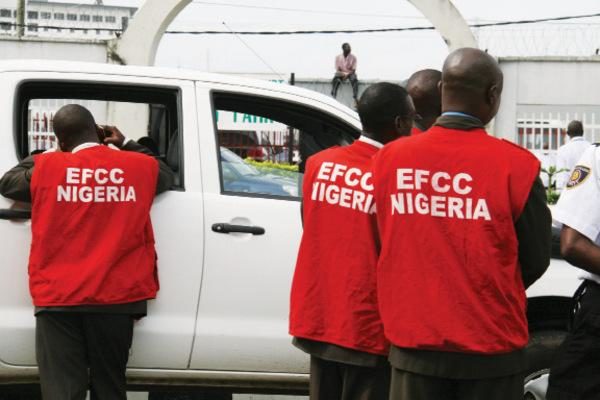 The Economic and Financial Crimes Commission EFCC, Thursday opened the trial of the alleged N22.8 billion fraud against a former Chief of Air Staff, Adesola Amosu, and 10 others in a Federal High Court, Lagos.

Amosun is charged alongside two other officers of the Air Force, AVM Jacob Adigun and Air Commodore Gbadebo Olugbenga.

They were arraigned on June 26 and had pleaded not guilty to the charges.

The judge had granted them bail in the sum of N500 million each with two sureties each in like sum.

At the resumed proceedings, counsel to the EFCC, Rotimi Oyedepo, called his first witness, Mojeed Olatunji, a compliance officer with Skye bank.

Olatunji told the court that the Nigerian Air Force (NAF) had an account numbered 1750013097 with Skye Bank.

He said that Messrs Adigun, Gbadebo and Ifeobu were those who had the mandate on the account and on whose instruction monies were withdrawn.

Armed with the statement of the said NAF’s account with Skye Bank, Mr. Olatunji took the court through a number of inflow and outflow of cash transactions carried out on the account.

For example, he told the court how N2.4 billion was credited into the account on September 11, 2014 and how this was followed by a debit transaction of N959.7 million, N893.2 million and N556.3 million, respectively.

The witness said that the debit was in favour of the NAF Special Emergency Operation account.

The charges against the accused border on conspiracy, stealing and money laundering.

In one of the counts, the accused were said to have indirectly converted N3.6 billion belonging to the Nigerian Air force to their own use.

In another instance, the EFCC alleged that Amosun and the others stole over N323 million from the accounts of the Nigerian Air Force between March 21, 2014 and March 12, 2015.

The commission said the alleged theft was for the purpose of purchasing for themselves a property situated at No.1, River Street, Wuse II, Abuja.