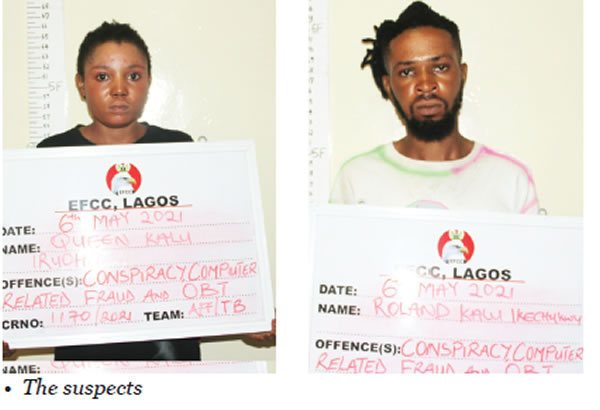 Officials of the Lagos Zonal Office of the Economic and Financial Crimes Commission (EFCC) have apprehended two siblings for their alleged participation in Internet fraud.

The suspects, Queen and Rowland Kalu, were apprehended by EFCC on Wednesday, May 5, 2021, at the Amikanle, Alagbado area of Lagos State.

The Commission, in a statement on Thursday, said Queen, a graduate of Banking and Finance, admitted to the crime, stating that she was involved in online dating and made money from the criminality.

Queen also supposedly stated that she assisted her brothers, including one Prince Kalu, presently at large, to speak to male victims and swindle them of their money.

EFCC disclosed that a Mercedes Benz and cell phones were recovered from the suspects.

Similarly, the Commission stated that it apprehended eight suspected Internet fraudsters in Abuja.

The statement read, “Investigation indicates that the suspects operated an academy for training Internet fraudsters from their hideout. Items recovered from them included eight mobile phones. All the suspects will soon be charged to court.”

Tragic!!! Many burnt to death as bus catches fire on Lagos-Ibadan highway