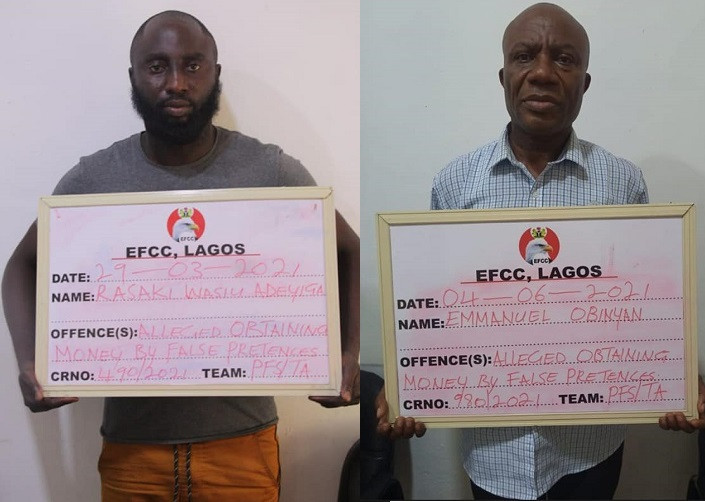 Read the statement by EFCC below…

The complainants, Stephen Chinemelum and Emeka Chinemelum, alleged that their father, the late Daniel Chinemelum, sometime in July 2015, entered into a partnership agreement and also signed a memorandum of understanding (MoU) with Obiyan for the formation of Fedan Courtyard Home Services Limited, a real estate company.

According to the complainants, the late Chinemelum, who was the Principal Partner, allegedly paid the sum of N52, 000, 000. 00 (Fifty- two Million Naira) into the suspect’s Zenith Bank account number 1011861572 as an equity contribution to the business.

The complainants further alleged that the suspect, however, failed to render an account of the business at the expiration of the five-year duration of the agreement.

Efforts by the complainants to retrieve the money proved abortive, thereby necessitating the complaint to the Commission.

In a related development, the Lagos Zonal Office of the EFCC has also arrested one Rasaki Wasiu Adeyiga for an alleged fraud to the tune of N24, 260,000 .00( Twenty-four Million, Two-hundred and Sixty Thousand Naira).

Adeyiga allegedly presented himself to the complainant, Ahmed Garba Shinkafi, as a businessman dealing in importation of automobiles from the United States of America and Europe.

The complainant alleged that he paid the sum of N25m, for the purchase of a Lexus SUV, into the suspect’s account number 0136968208 domiciled in Guaranty Trust Bank Plc.

Investigation revealed that the suspect, however, reneged on his promise and diverted the money to his personal use.

The suspects will be charged to court as soon as investigations are concluded.

At least 20 persons burnt to ashes in Jigawa road accident