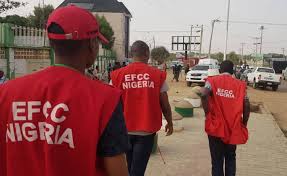 The Port Harcourt Zonal Office of the Economic and Financial Crimes Commission on Friday arrest George Turnah, a former Special Adviser to Dan Abia, an erstwhile Managing Director of Niger Delta Commission and two others alongside nine firms before Justice Mohammed Turaki of the Federal High Court sitting in Port Harcourt, Rivers State.

According to a statement signed by the Head, Media, and Publicity, EFCC, Wilson Uwujaren, on Monday, the defendants were re-arraigned on an amended 23-counts, bordering on obtaining money by false pretense, money laundering, and abuse of office to the tune of N2.89bn

Appearing before Justice Mohammed Turaki, the defendants pleaded not guilty to the charges preferred against them when they were read.

EFCC’s prosecution counsel, I. Agwu, adopted the subsisting evidence on record and told the court that the witnesses who had earlier testified before the court wouldn’t be called upon to re-testify against the defendants.

One of the charges indicated that the defendants on November 24, 2014, took possession of the sum of N708,500,000 by false pretense from the Niger Delta Development Commission, purportedly for the purpose of providing quick win jobs for 300 youths and women groups, and thereby committed an offense contrary to Section 15(2)(d) of the Money Laundering (Prohibition) Act, 2011 as amended and punishable under 15 (3) of the same Act.

Another charge reads, “That you George Turnah Alabh in 2014 within the jurisdiction of this Honourable Court did receive the sum of $1000,000.00 (One Million United State Dollars) (at the exchange rate of N184 to a Dollar) cash from one Umar Lawal of Hakuri Global Concept exceeding the statutory limit without going through a financial institution and thereby committed an offense contrary to Section 1 (a) of the Money Laundering (Prohibition) Act 2011 (as amended) and punishable under Section 16 (2) (b) of the same Act.”

On his part, counsel for the defendants, Professor Amuda Kaneke, (SAN), prayed the court not to revoke the existing bail granted the defendants and further urged the court for an adjournment to enable him to study the amended charge against his clients before proceeding with his defense.

Acceding to the defense counsel’s prayers, Justice Turaki ordered that the defendants’ existing bail continue and adjourned the matter till March 15, 16 and 17, 2021 for continuation of trial.

NDLEA to test all Nigerian students for marijuana, other drugs: Marwa