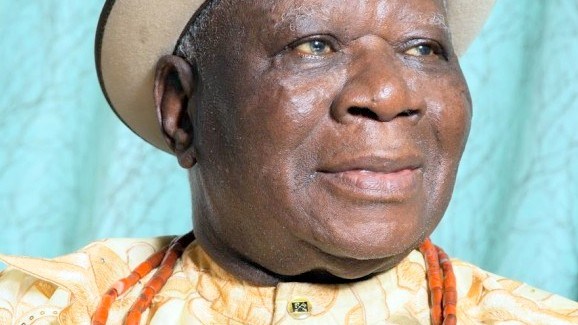 Mr. Edwin Clark, an elder statesman showed his disapproval towards the Nnamdi Kanu led ‘Biafra agitation’.
He made this known on Tuesday when the Chairman, Senate Committee on Local and Foreign Debt, Shehu Sani, visited him in his Abuja residence.
He said “when Kanu talks about Biafra, he is talking nonsense. We do not want a second war.
“America fought their civil war for a long time and they are not thinking of a second one. Kanu should drop the agitation.
He also condemned the quit notice by the Arewa Group to Igbos in the North, saying it was worrisome.
He warned that secession or agitation were not the way to go on restructuring the country.
“At the same time, it is arrogant and foolish on the part of some Northern youths to issue quit notice. You do not own the North. It is part of Nigeria and anybody can live there.
“The Igbos have been living in the North for over 100 years. I condemn all of them.”

The elder statesman, emphasised the need for restructuring for equity and balance in the country.
He explained that although the call for restructuring had been loud in recent times, the country had been undergoing restructuring.
“We have been living together since 1914 and from time to time, we have been changing the way of our lives.
“In 1947, Dr Nnamdi Azikiwe said the Richard Constitution was obnoxious; that it was anti-people.                                                    In 1950, we had the Macpherson Constitution which created the three regions and in 1963, we had another constitution.
“During all these constitutions, the issue of fiscal federation was very prominent. So, we have been restructuring this country and nobody talked about breaking up the country.
“The war between 1967 and 1970 was an unfortunate one.”
Mr. Clark said making necessary changes to allow for social justice was the way to go and urged the National Assembly (NASS) to re-visit the issue of devolution of power upon resumption from recess, saying it was one of the ways to properly restructure the country.
According to him, the vote against devolution of power by NASS is borne out of the fear that it would whittle down the powers of legislators.
“We have reached a stage where states are not paying salaries and something has to be done to gear their minds to see what they can do in their own area to generate money.
“I am happy you believe in restructuring, which can be achieved within a short time but it may take up to 20 years if we do not agree among ourselves.
“So, once more I want to say that when you resume, the issue of devolution of power should be re-visited so that Federal Government will deal with foreign affairs, prisons, customs and a few other things.

On call to return to regionalism, Mr. Clark said “you cannot abolish the states now and say you want six regions. It is not going to be easy or possible now.
“I feel we should use the same states as federating units and the local governments should remain with the states.”
He called for the establishment of Revenue Mobilisation Commission to deal with funds that move between states and local governments to sustain them.
Mr. Clark, a former federal commissioner of information, promised to convene a meeting of elder statesmen across the country to find lasting solution to the problem of restructuring.
In his remarks, Mr.A Sani, who is also the Vice Chairman Committee on Foreign Affairs, said one of the reasons the devolution of power did not scale through in NASS was the fear that state governments might abuse their powers.
He said “the problem we have with devolution of power is how to tackle some of the problems that come with it.
“For example, the present crop of governors might not be able to handle state police in a manner that people who disagree with them can be safe.
“Secondly, the manner in which elections are conducted by state independent electoral commissions where the ruling party in state wins all positions is worrisome.
“So, if we devolve the police, we have to allay the fears of people on the implications. Those who are championing some of these issues need to make clarifications.”
On derivation and resource control, the lawmaker said it was in the best interest of the country to stop thinking about oil because it was becoming non-attractive globally.
On the quit notice, Mr. Sani said “it is embarrassing”.

How to Find Your Niche, Just Before You Start Your Business