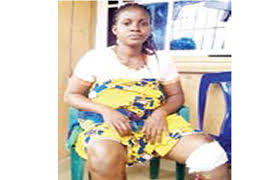 TopNaija reports that some Policemen attached to the Zone 5 Police Command, Benin City, Edo State, have been accused of brutalizing a man, Mr Ifeanyi Ikem, and shooting his wife, Ebere, during a raid on their house in Umunede, in the Ika North East Local Government Area of Delta State.

It was gathered that the incident happened on Friday around 10 pm.

Both husband and wife told our correspondent that over six officers, who came in three vehicles on mufti, allegedly dismantled their window burglar-proof bars to enter their apartment.

Ifeanyi said, “I just put off my generator so I could go to bed that night. I was about to lie on my bed when I heard footsteps and my dog barking. I saw two men — one wearing complete native attire and the other was in jean trousers and a jean jacket.

“They requested to know the occupants of the house, but I kept quiet because I did not know them. So, my wife asked from inside to know who they were. They replied that she should call her husband that somebody was looking for him.

“My wife told them that her husband was asleep. In the process of my wife interrogating them, they frequently called one Sunny.

“They started forcing the glass on the window and pulling down the burglar-proof bars. I told my wife and children to shout. Their shouting made people hear that something was happening in the house.

“Three men entered first, so we started struggling. I saw them with guns and I thought within me that these people wanted to kill me. They said there was something that I did. They said one Prince Paradise sent them that I destroyed his car and building and I told them that I did not know anything about it.

“As they saw that people were coming, they started shooting, while still dragging me. Because my wife didn’t allow them to take me away, they shot her. As my wife was shouting that she had been hit, I held on to them. They started shooting, as they ran into their vehicles and zoomed off.”

The acting Police Public Relations Officer in the state, DSP Edafe Bright, confirmed that the policemen were from Zone 5.

The Zonal Police Public Relations Officer, DSP Tijani Onomo, said he was not aware of the operation.