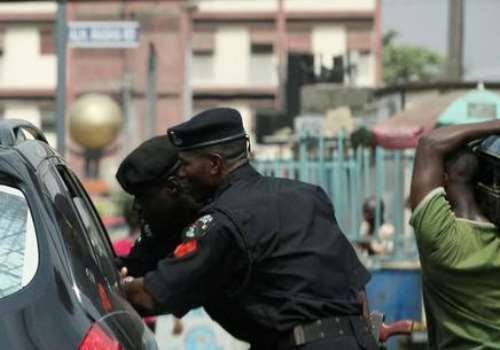 A Nigerian student has cried out after some police officers extorted him of his school fees and left him with peanuts.

A student pleaded for justice after he was extorted N90k out of N93k school fees by men of the Nigerian Police Force.

He said he was traveling to Lagos from Oyo state when the policemen intercepted the public transport he boarded and started harassing them.

The young man said he telephoned the Police PRO and Commissioner but the people who answered dismissed it as wrong number.

Lamenting further, he stated that the police officers claimed they were taking him to the police station but they diverted into a bush and threatened him.

The distraught student sent a message to Influencer, and #EndSARS activist, Rinu Oduala who then reposted it online.

The student wrote; “Please help me I was extort illegally yesterday on my way coming to Łagos and was calling the police pro and commissioner all picking and keep saying wrong number but I call one former pro he said that is there number that is how they do

The most painful part I told them this is my school fee and they extort 90k out of the 93k in my accounts. Was just driven to the bush they told the other passenger they are taking me to the office but I will join them at the popular Amala joint in that Oyo they should wait for me

On our way they pass different route and in there car they keep telling me I should call anyone I know to send me money. I told them no one it’s kinda hard this time immediately one of them collect my phone and told me to open my bank app and I did And was taken to a Pos which I think it’s there Pos cause when I send the money they did not receive alert once I told him nah awodi police he said Haa eyini and he gave me the cash immediately.

I can send you the driver number to confirm these people have no mercy was pleading crying in there car Still yet they extort me. They left 3k for me”

Isn’t this so heartbreaking?💔 pic.twitter.com/yjdbVk4mnj