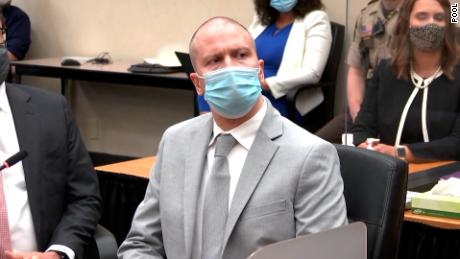 Derek Chauvin, an embattled former US police officer, has been sentenced to 22 and half years in prison (270 months) for the murder of George Floyd.

According to CNN, Hennepin Court Judge, Peter Cahill, in his ruling on Friday, said, “the sentence is not based on emotion or sympathy, but i want to acknowledge the pain both families are feeling, especially George Floyd’s.”

“I am not basing my sentencing on any public opinion, the job of the trial court is to apply the law,” he said.

This is coming after Minnesota Assistant Attorney General Matthew Frank asked for a sentence of 360 months (30 years) for Chauvin.

Recall that Floyd, an unarmed 46-year-old man died on May 25, 2020, in the hands of the White police officer in Minneapolis, Derek Chauvin.

In an image taken from video, former Minneapolis police officer Derek Chauvin listens to his attorney, Eric Nelson, speak during victim impact statements as Hennepin County Judge Peter Cahill presides over his sentencing, Friday, June 25, 2021, at the Hennepin County Courthouse in Minneapolis. Chauvin was convicted in the May 25, 2020, death of George Floyd. (Court TV Pool)

Chauvin who was seen in the viral video with his knee on Floyd’s neck, was charged with third-degree murder and manslaughter which some blacks and protesters believe were not harsh enough for the crime.

However, Minnesota Attorney General Keith Ellison later announced that the charges against Chauvin had been upgraded to second-degree murder and that new charges have been filed against the other three officers involved.

Chauvin and three colleagues arrested Floyd, 46, in May 2020 on suspicion of having passed a fake $20 bill in a store in Minneapolis, a northern city of around 420,000. They handcuffed him and pinned him to the ground in the street.

Chauvin then knelt on the back of Floyd’s neck for nearly 10 minutes, indifferent to the dying man’s groans and to the pleas of distraught passers-by.

The scene, filmed and uploaded by a young woman, quickly went viral. After weeks of home confinement due to the Covid-19 pandemic, hundreds of thousands of people poured onto streets across the country and overseas, to demand an end to racism and police brutality.

It took weeks for the mass demonstrations to taper off, but the debate around the pressing social issues remains vivid in the United States, where President Joe Biden has been slow to come up with the police reforms he promised during his campaign.

Minnesota law provides for a minimum sentence of 12.5 years but Floyd’s brother, Terrence Floyd, his voice choking, told the court that Cahill should hand Chauvin the stiffest term possible.

Watch the trial in full below: