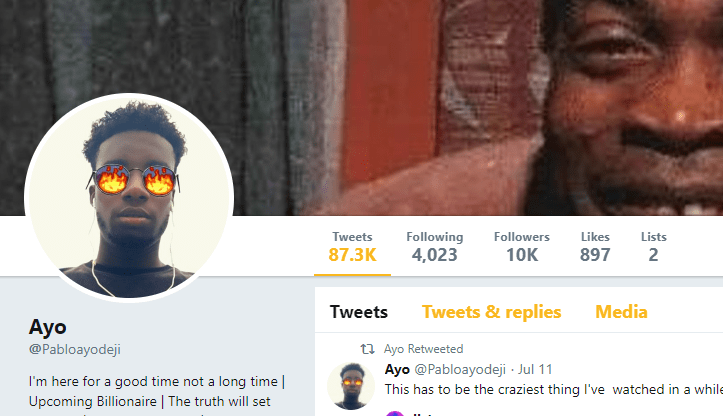 A Twitter user on Monday admitted to swindling scores of unsuspecting users on the social networking platform, hours after he was revealed as a con artist.

The confession of Ayodeji Adeniji capped a long day of social media outrage that puts the spotlight on how unscrupulous elements are taking advantage of people’s benevolence to perpetrate untold rip-off.

The controversy began on Monday morning when a Twitter user @nuellaa_ag tweeted ‘she’ had recently lost her job and sought financial support to get by this Yuletide.

The appeal garnered hundreds of retweets within minutes, prompting a deluge of support from sympathetic users.

As users began to transfer their widow’s mite to the bank account ‘she’ provided, one curious user observed something untoward and subsequently raised the alarm

It turned out that the handle has a pattern of requesting for financial support using different screen names online.

Mr. Adeniji, 21, had previously provided the account details when he had a spat with a lady after a date went awry in late March.

After initially denying being a con artist, Mr. Adeniji finally succumbed to social media anger and threats of both physical and legal backlash against him.

“So I take responsibility for scamming people on the TL. Nothing I say will justify what i did. But mans was really broke and that seemed like my last resort. I’ll still be dealt with so this is not a get out jail card,” he tweeted.

He also apologised to siblings whose bank accounts he repeatedly used to swindle Twitter users in the past.

Okay let me settle this once and for all .

So I take responsibility for scamming people on the TL. Nothing I say will justify what i did . But mans was really broke and that seemed like my last resort . I’ll still be dealt with so this is not a get out jail card20:19 – 25 Dec 2017

Mr. Adeniji promised to pay back money to those he had obtained from under false pretences in the past.

Wema Bank’s action might have been informed by the torrent of angry tweets directed at its handle throughout Monday.

The bank did not immediately respond to a request for comments from PREMIUM TIMES Monday night.

Mr. Adeniji declined further comments to PREMIUM TIMES about the matter Monday night. He said he has informed his lawyers about the case.

Hours before his confession, he had boasted that he could get away with his wrongdoings in the same manner that some Nigerian public officials got away with stealing public funds.

Your president and governors are out there stealing millions and going Scott free, if they can go so Scott free so can anyone.

Mr. Adeniji first drew social media attention on March 30 when a lady refunded some expenses he had incurred on a date.

Ore Oyebola returned N5,000 to Mr. Adeniji who had only spent N3,800 and asked him to keep the change after he openly ranted about how a lady he took out failed to accept his advances.

The affair became a subject of widespread discussion at the time, and the pair later ended up on a radio programme where the matter was resolved.

Ms. Oyebola, a student, told PRENIUM TIMES she had since parted ways with Mr. Adeniji after their relationship suffered a series of drawbacks.

His fraud case has now sparked renewed interests about how crooks use Twitter and other social media platforms to make emotional appeal to get citizens to transfer money to them.

Several users have complained about being swindled in the past, including by duplicitous online traders, but none appeared to be as widespread and as brazen as Mr. Adeniji’s