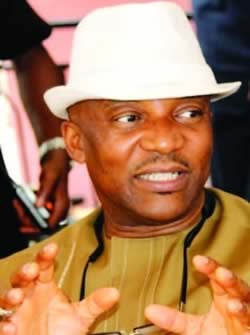 Okeke was presented to Buhari by the APC Caretaker Committee Chairman, who is also the Governor of Yobe State, Mai Mala Buni, alongside the Chairman of APC Campaign Organisation for the November 6 governorship election in Anambra State and Governor of Imo State, Hope Uzodimma.

Uzodimma, who spoke to State House Correspondents after the meeting confirmed that the deputy governor of Anambra state had joined the APC.

He expressed optimism that the APC would win the November 6 governorship election in Anambra State because of what the President has done for the South-East zone.

He said, “All I know is that I am the Chairman of Anambra gubernatorial campaign council and I am working, doing my best to ensure that APC wins that election.”

“You recall that after the visit of the President to Imo State and his engagement with the leaders form South-East, a lot of things were exposed; the interventions of the Federal Government in the South-East like the progress report of the 2nd Niger Bridge, Portharcourt-Enugu Road, Onitsha-Enugu road and Owerri-Aba road.

“So the people of Anambra State who were also at that gathering have discovered the genuineness of the President and his policies as it concerns the Igbos and they have seen that it is only through national politics, which some of us have been advocates of, that the South-East will rapidly develop.

“Therefore, our people are now willing to join the winning team, which is the APC party. At the last count, eight members of the House of Representatives from APGA and PDP joined the APC.

“Just this afternoon, the Deputy Governor of Anambra State joined the APC and has been presented to the President.  If there is any strong parameter for conducting an opinion poll, this exodus of legislators and the second-in-command in Anambra State, should automatically translate into electoral victory.”

On the claim by Governor Willie Obiano that APC was giving N100m to defectors from the other parties, Uzodimma said he would not want to “join issues” with the Anambra governor.

He said, “That means that APC is working. So, I don’t want to lament. In political programme, you can lobby people. And I don’t think APC has money to buy people.

“By the grace of God, the way we are going, I won’t be surprised if everybody in Anambra declares for APC before the election, including the governor.

“Well, if the governor wants to come and collect money, we will give it to him.”

Dr. Nkem Okeke is a Nigerian Politician who has been the Deputy Governor of Anambra State since 17 March 2014

Related Topics:DEFECTIONNkem Okeke
Up Next