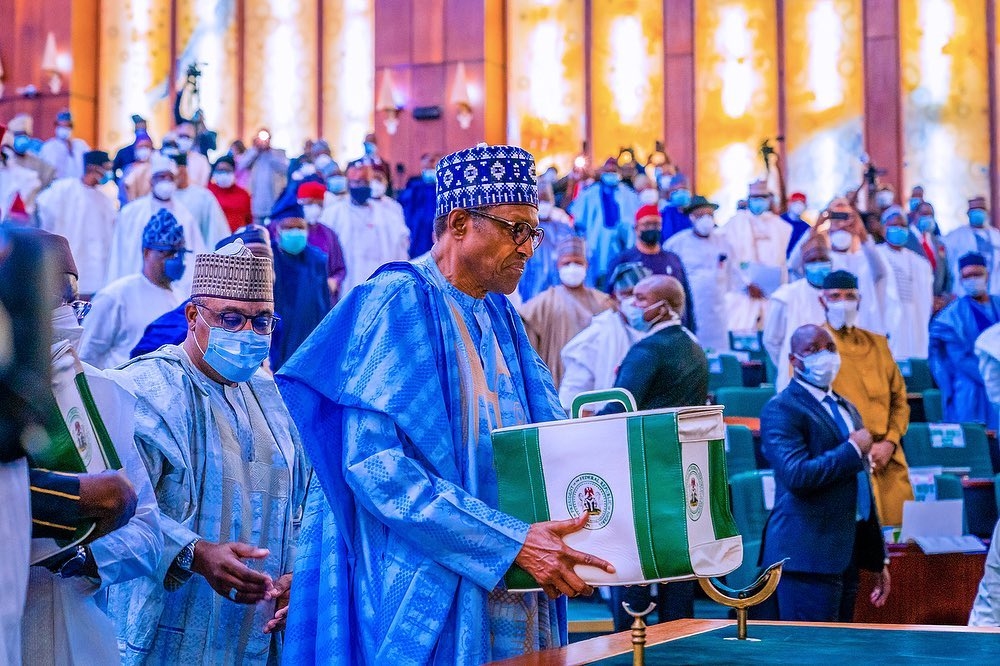 On Thursday, President Buhari presented to the National Assembly,  N13.08tn budget estimates for 2021  with N3.12tn (23.85 per cent) earmarked for debt servicing.

Buhari, who said the nation’s economy might relapse into recession, stated that  N3.85tn (29.43 per cent) was voted for capital projects, while personnel costs (salaries and allowances) would gulp    N3.76tn (28.75 per cent).

Giving other highlights of the appropriation bill, Buhari said the budget was premised on daily crude oil production of N1.86m and oil price of $40 per barrel.

The President, who tagged the proposed fiscal document, ‘Budget of Economic Recovery and Resilience’,   assured Nigerians that his regime would do everything possible to take the economy out of recession in 2021.

The President said, “The Nigerian economy is currently facing serious challenges, with the macroeconomic environment being significantly disrupted by the coronavirus pandemic.

“I am glad to note that, through our collective efforts, our economy performed relatively better than that of many other developed and emerging economies.

“The GDP growth is projected to be negative in the third quarter of this year. As such, our economy may lapse into the second recession in four years, with significant adverse consequences.”

Giving a breakdown of the 2021 budget proposal,  Buhari put aggregate expenditure at N13.08tn,  which includes N1.35tn spending by government-owned firms and grants/aid-funded expenditures of N354.85bn.

He added that the proposed N13.08tn expenditure also comprised non-debt recurrent costs of N5.65trn; personnel costs of N3.76tn; and pensions, gratuities and retirees’ benefits of N501.19bn.

He said, “ The 2021 budget deficit,  inclusive of government-owned enterprises and project – tied loans, is projected at N5.20tn, representing 3.64 per cent.”

The assumptions, according to him,  include an oil benchmark of $40 per barrel and a daily oil production estimate of 1.86m barrels, inclusive of condensates of 300,000 to 400,000 barrels per day.

Buhari said the exchange rate would be based on N379 per dollar, GDP growth projected at 3.0 per cent and inflation closing at 11.95 per cent

He said the Federal Government revenue, based on the above fiscal assumptions and parameters was estimated at N8.433tn in 2021.

He, however, said the total revenue available to fund the 2021 federal budget was estimated at N7.886tn.

This, according to him,  includes grants and aid of N354.85 bn as well as the revenues of 60 government-owned enterprises.

He noted that the country still faced the existential challenge of coronavirus pandemic and its aftermath, stressing that the development had provided a justification to exceed the threshold as provided for by the appropriation bill.

According to him, the deficit will be financed mainly by new borrowings totalling N4.28tn;  N205.15bn  from privatisation proceeds and N709.69bn in drawdowns on multilateral and bilateral loans secured for specific projects and programmes.

He added that N484.49bn provided for statutory transfers in the 2021 budget represented an increase of N56.46bn or 13 per cent, over the revised 2020 provision.

The beneficiaries of the statutory transfers, according to him are the North-East Development Commission, N29.70bn; the National Judicial Council, N110bn and the Universal Basic Education Commission, N70bn.

He said, “In our efforts to enhance national security and human capital development, a major part of the 2021 recurrent cost estimate is allocated to paying salaries and overheads in MDAs providing the critical public services.

“Personnel cost is still our largest single item of expenditure. In the seven months to 31st July 2020, it accounted for 34 per cent of total Federal Government spending and is projected at 33 per cent of 2021 expenditure.

Only federal workers on IPPIS will receive salaries, Buhari insists

“To check the incidence of payments to non-existent personnel and unauthorised allowances, only federal staff that have been captured on the Integrated Personnel Payroll Information System platform will receive salaries.

All agencies must get approval before fresh recruitment

“All agencies have been directed to ensure that they obtain all necessary approvals before embarking on any fresh recruitment. Any breach of these directives will be severely sanctioned.

“A total of N2.18tn  has been set aside to service domestic debts, while N940.89bn has been provided for foreign debt service.

“N220 billion is provided for transfers to the sinking fund to pay off maturing bonds issued to local contractors and creditors.”

Buhari said total overhead costs of MDAs and government-owned enterprises were projected to rise to N625.50bn in 2021, mainly due to the inclusion of the overheads of an additional 50 firms. He said provisions had been made for newly created agencies.

Buhari said N3.85tn  would be made available for capital projects in 2021, with MDAs getting N1.80tn.

He added that N745bn  had been earmarked for capital supplementation; N355bn  for grants and aid-funded projects; N20bn  for the  Family Homes Fund, N25bn for the Nigeria Youth Investment Fund; and N336bn for 60 government-owned enterprises.

Buhari said N247bn  had been earmarked for capital component of statutory transfers; and N710bn for projects funded by multilateral and bi-lateral loans.

He further explained that the 2021 capital budget was N1.15tn higher than the 2020 provision of N2.69tn. According to him, the provision moves closer to the regime’s policy target of 30 per cent.

He said the capital expenditure would focus on the completion of as many ongoing projects as possible, rather than the commencement of new ones.

He said, “We have also made efforts to ensure equity in the distribution of projects and programmes in the proposed budget. I will be providing the National Assembly a list of some of the most critical projects which we must work collectively to ensure they receive adequate funding.

“Until projects reach completion, they do not deliver the dividends of democracy that Nigerians rightly deserve.”

He said the Ministry of Agriculture and Rural Development would facilitate the integrated development of its sector by promoting crops’ value chains; as well as providing rural roads, water and sanitation, veterinary and pest controls, grazing, food and strategic reserves, and access to inputs and extension services.

He also explained that the 157 per cent increase in the capital allocation to the health sector was to enhance the capacity to deliver healthcare services through the procurement of equipment, vaccines and other facilities.

Buhari also said the Ministry of Education’s capital allocation had been increased by 65 per cent to improve the children education, while funds had been provided for the provision of scholarships to Nigerian students at home and abroad.

He said, “To improve access to education, we have made provision for the establishment of five new Federal Science and Technical Colleges. We have also provided for the payment of allowances to 5,000 teachers under the Federal Teachers Scheme.

“In line with our commitment to invest in transportation Infrastructure, capital allocation to the Works and Housing sector is to facilitate the completion of several critical projects in 2021.

The President admitted that his government was passing through difficult challenges to raise revenue to fund the budget but said it would leverage on technology and automation, as well as more effective monitoring of independently generated revenues.

He also said social safety nets would be implemented. Buhari stated, “In furtherance of our inclusiveness agenda,  N420bn  has been provided to sustain the Social Investment Programme.  N20bn  has also been set aside for the Family Homes Fund, our Social Housing Programme.

“We have expanded our National Social Register, to include an additional one million Nigerians following the outbreak of coronavirus.

“Furthermore, the Central Bank of Nigeria is reducing the interest rate on its intervention facilities from 9 per cent to 5 per cent with a one-year moratorium till 31st March 2021.

He said it would enable the CBN to provide concessional lending of N100bn  to households and small businesses; N100 bn to the healthcare and pharmaceutical industry; and N1tn  to large agricultural and manufacturing businesses.

Commenting on the budget, the Director General, Lagos Chamber of Commerce and industry, Dr Muda Yusuf, in an interview with The PUNCH,  commended the President  for early presentation of the budget.

He said this was an indication that the regime was committed to sustaining the return to January to December budget cycle.

The LCCI DG, however, expressed concern over the revenue projection, saying could lead to a large budget deficit.

On its part, the All Progressives Congress  commended the President over his management of the nation’s economy amidst the global COVID -19 pandemic.

This was contained in a statement titled “APC hails 2021 budget of economic recovery, resilience…urges ASUU to join the IPPIS, signed by its Deputy National Publicity Secretary, Yekini Nabena, in Abuja, on Thursday.

It said the budget was in tandem with the regime’s vision for Nigeria, adding that it was achievable.

But members of the Peoples Democratic Party in the House of Representatives condemned the  appropriation bill.

The opposition lawmakers, in separate interviews with journalists, dismissed the  budget proposal as unrealistic.

The Deputy Minority Leader, Mr Toby Okechukwu, said the proposed N13.08tn budget was  not different from the previous ones, noting that while the size was increased, value of the naira had fallen against the dollar.

Another member of the PDP, Mr Bamidele Salam, said,”  We need to assess this size of the budget in comparison with the international benchmark of global currencies. As of this time last year, it was about N360 to a dollar.  Today it is about N500.  Although the size appears big, comparatively, it is not.”

Another PDP member, Mr Ben Igbakpa, said he was  worried about borrowing to finance the budget.

The Presidency and the Chairman of the House Committee on Finance, Mr James Faleke, who is a leader of  the APC  caucus, however, said the proposal was achievable.

The Special Assistant to the President on National Assembly Matters (House of Reps), Mr Umar el-Yakub, said it was a realistic budget.

Faleke agreed with the President that new projects would  not be introduced in 2021 to allow completion of the ongoing and abandoned ones.