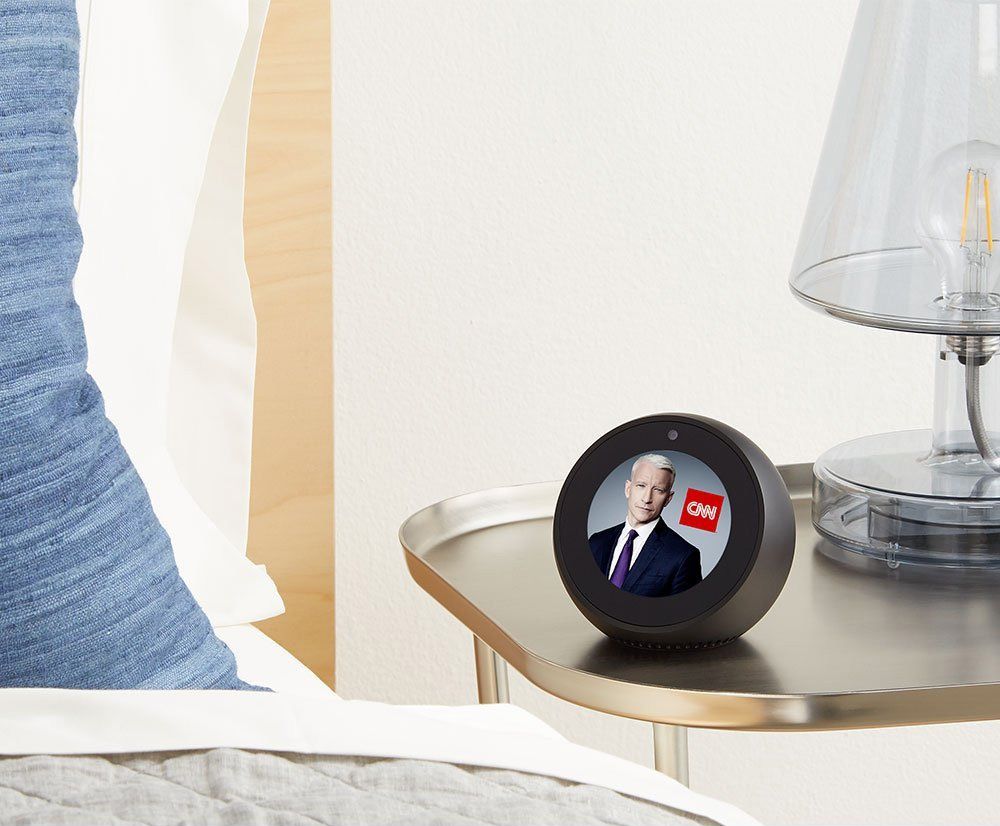 Amazon unveiled six new hardware products at its surprise event in Seattle yesterday, but the Echo Spot has everyone talking. Most people think the Echo Spot is cute; a little alarm clock that’s designed to sit next to your bed. While all the focus is on what the Echo Spot looks like, it’s important to remember that Amazon is using the Spot as a very clever way of making you comfortable with having a camera in your bedroom. It’s also a camera that will probably be pointing directly at your bed.

Amazon launched its Echo Look camera earlier this year to judge your outfits. It’s designed to sit in your wardrobe and offer you style advice, and it was Amazon’s first Echo device with a camera. Amazon quickly followed it up with the Echo Show, a touchscreen device that sits in your kitchen and lets you watch tutorials or recipes and participate in video calls. Amazon’s Look device is still only available exclusively by invitation, and in hindsight it now looks like experimental hardware to gauge the reaction of a camera in the bedroom. A litmus test, if you will.

Echo Spot feels like the real push to get cameras inside your smart home. It’s more than just an alarm clock, but Amazon is definitely pushing this as a $130 device that will sit next to your bed. Promotional materials show it sitting on nightstands, providing a selection of clock faces and news / weather information. The privacy concerns are obvious: an always-listening (for a keyword) microphone in your bedroom, and a camera pointing at your bed.

This combination of features would have triggered alarm bells just a few years ago during the NSA spying revelations. Microsoft’s Kinect camera creeped a lot of people out just by sitting in a living room, always listening and ready. So why aren’t people freaking out about Amazon’s Echo Spot? Timing is key.

Over the decades, we’ve witnessed the proliferation of CCTV cameras and laptop webcams in our lives. Both have had obvious privacy concerns associated with them, and Facebook CEO Mark Zuckerberg still tapes up his webcam as a result. Still, we’re not concerned about buying laptops with webcams these days, or stepping onto public transport and getting caught on camera hundreds of times a day. Even the phones we put into our pockets have cameras and microphones, and Apple is now at the point where it can put Kinect-like technology into the front-facing camera on the iPhone X.

All of these camera advancements have had obvious benefits to consumers, balanced with privacy concerns. The thought of putting your holiday photos online for anyone to see 15 years ago was insane, but now everyone shares daily photos to Facebook or Instagram without even pausing for thought. We’re now entering a similar phase for cameras in the home. You probably already have a smartphone with a camera beside you while you sleep, but it’s probably pointing at the ceiling instead of your bed. New privacy concerns and social norms are now being broken down through devices like the Echo Spot.

The chances of hackers targeting your own Echo device are also slim, for a variety of reasons. Security has also progressed alongside camera advancements, and hardware can now be sandboxed and protected against attacks. The usage rates of smart home devices like the Echo are also low enough to not make them an easy target… yet.

If smart home devices do take off and adoption rates increase then even more privacy concerns will follow. That will require more people to use devices like the Echo Spot for their daily lives, and for the hardware and software to offer more features. We’re now approaching a period in technology where it will be key for computers to start having precise machine vision. Google, Microsoft, Amazon, Facebook and many other companies are working on artificial intelligence that can process images and video and let a computer see and understand the world around it.

The Echo Spot might seem like a basic and cute alarm clock for now, but these devices could do so much more in the future. Machine vision will open our smartphones and smart homes up to much more than what a microphone can do. It’s easy to imagine that the Spot or something similar will offer the clothing recommendations that the Look was designed for, or help you buy even more products from Amazon.

If you’re happy having a camera next to your bed, then you probably won’t mind them being dotted around your house. Imagine facial recognition where Alexa automatically adjusts the lighting in a room to your own preference, or the temperature. Alexa could even play your own playlists, or tell you when your food is ready and spot your own friends at the front door. It’s this clear convenience that helps technology break down every barrier of privacy, and the future of cameras in your home is just another big part.