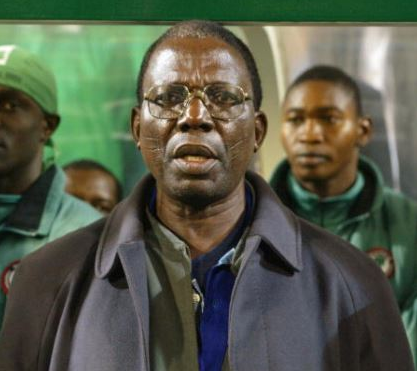 Quickly, before I give you the gist of this post, I just want to give some of y’all ladies an advice- because I love y’all and don’t want to see you disappointed.

Here it is, if your dream/plan/goal is to marry a rich man, divorce him, and part with half his wealth and house; first of all stop watching too much Hollywood movies and secondly, get a visa and get TF out of this country. That ambition is not feasible in Nigeria.

Now let me tell you what’s up.

A Mapo Customary Court in Ibadan has dissolved the 30-year-old marriage between Chief Adegboye Onigbinde and his wife Anne, because there was no more love between the two.

Onigbinde had asked the court to dissolve the marriage, accusing his wife of being a wasteful spender and an unrepentant troublemaker.

President of the court, Ademola Odunade, however, directed the former Super Eagles Technical Adviser to “pay a cash sum of N5,000 to enable Anne move her belongings out of his house.”

I know you want to laugh, but control yourself. It’s not funny.

“My lord, with my 79 years of age, I cannot continue to die in silence of
Anne’s litany of problems.” Onigbinde stated,
“Among many other troubles I have encountered in the hands of Anne, I
have also suffered uncountable financial losses during the process of
trying to give Anne means of livelihood so that she wouldn’t be idle.”
“On three separate occasions, I have established veritable business
ventures for her and on each occasion, Anne wrecked the business.”
“I can’t continue in such wastage. For many years, Anne has been a thorn in my flesh through ceaseless trouble-making as it is one day, one trouble in my home.”
“Can you imagine that it was not until only one week to the wedding ceremony of the only daughter she had with me that she informed me?”
“In fact, Anne has openly turned that daughter against me because she
doesn’t take any instruction from me.”
“Anne is now a bad influence on the daughter and she doesn’t even
have any good relationship with the rest of my children.”
“For instance, when I lost my younger brother, Anne and her daughter
refused to be sympathetic by registering any form of condolence.”
“The list of her misbehaviour is endless, please terminate our union.”
Anne had however opposed the request for divorce and denied all the allegations levelled against her by Onigbinde.
“My lord, I have done everything possible to please my husband, but he is refusing to be pacified.”
“Ever since he got married to another wife 10 years ago, things have changed from bad to worse, as I no longer know how to do things in his presence.”
“Since then, Onigbinde’s body language is for me to vacate his home; he
no longer finds happiness in me.”
“On a particular day, just as I opened the door, I came across a snake
waiting to harm me, but I raised alarm and it was killed.”
“My lord, it was never in our agreement to be parting ways in this
manner.”
“In the interest of the child between us, I have nowhere to go, please,
help save my marriage,” Anne pleaded.

Fuller Lips: How To Get The Kylie Jenner Type Naturally