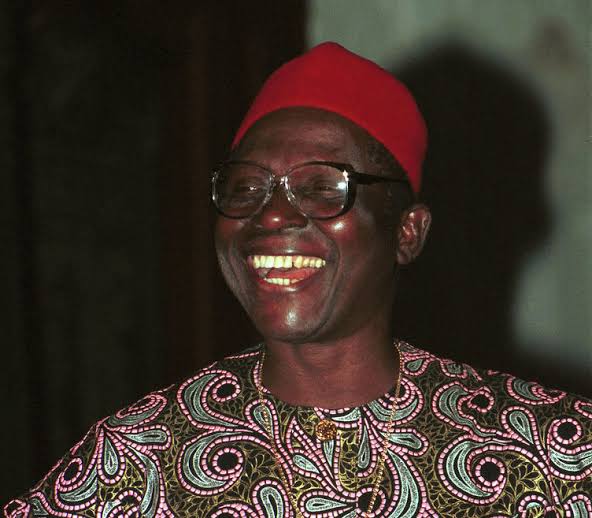 CAREER
To this day, his hit song ‘OsondiOwendi’ which was  released in 1984 can be heard booming from stereos in families in Eastern part of Nigeria as the song is regarded by some as one of the greatest songs ever recorded and listened to in Nigeria and has continued to be the standard for highlife music in Africa. In 1958, Osita  Osadebe left his clerical job with SCOA to pursue a career in music. He joined  the Empire Rhythm Skies band as Vocalist and a Maracas player led by Stephen Amaechi before going on to learn how to play the trumpet from Zeal Onyia who was one of the best trumpeters in West Africa at that time.

In 1958, he released his first album which had only two songs one of which was ‘Adamma’, a tribute to a beautiful lady. In 1959, he released a single ‘Lagos na so so enjoyment’ leaving the music scene to study Trade Unionism at the then Soviet Union.

In 1962, he returned, establishing the Stephen Osadebe and His Nigerian Sound Makers band and making radical changes in the highlife genre by prolonging the duration of each song to accommodate the vibrant energy of his audience on the dance floor, infusing witty social commentary in his music often attacking his adversaries in his music and sometimes touching lightly on issues affecting the country, eventually transforming highlife into the call-and-response pattern of African music. He is credited with popularizing the highlife genre as his slow, rhythmic songs were sure to pull listeners out of their chairs. His contributions as the voice of Highlife Music did not go unnoticed as it impacted the younger generation of artists like the late MC Loph and Flavor

In 1995, he went on his first United States tour, recording one of his most memorable and gripping albums, ‘Kedu America’ in Seattle, Washington State.

Osita Osadebe before his demise, recorded over 500 songs and over 30 albums some of which are ‘Oyalimas 80’ and ‘People’s Club Special – 10th Anniversary’ He was given a chieftaincy title, the Ogbuefi Ezealulukwufe of Atani land.

FAMILY
Chief Stephen Osita Osadebe survived by five wives and several children. His eldest son, Obiajulu Emmanuel Osadebe, followed in his father’s footsteps, remixing some of his hit songs but he died after a brief illness in January 2009 at the age of 43.

— National Honor of Officer of the Order of the Niger (OON) by the Federal Government of Nigeria.

— Best Highlife Artist of the Year in 1988 by the Performing Musicians Association of Nigeria (PMAN).