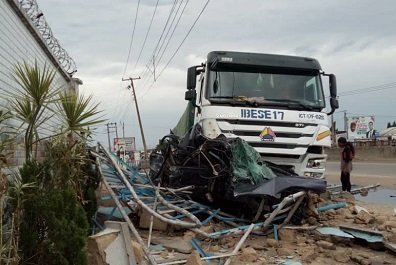 A Dangote Cement truck rammed into four vehicles parked along the Agbarho Junction axis of the East-West Road, in Ughelli North council area of Delta state, but death was averted due to the heavy rainfall.

The incident reportedly happened at about 8am.

Recall that the Delta State Government had issued a 14-day lockdown on all activities, including vehicular movements within, into and from the state, with the exception of persons on essential duties. Monday is day six of the sit-at-home order.

The drivers of the four vehicles had just returned from distributing food items to people in nearby villages and were parked on the side of the expressway, awaiting further instructions from their chairman.

However, the start of heavy rain forced them to take cover under a storey building located opposite where the cars were parked and about five minutes later, came the sound of the truck crashing into the vehicles.

No life was lost, but one of the cars, a dark ash Golf 3 Volkswagen, was completely destroyed. The fence and protectors of a filling station, Race Oil Limited, were also destroyed in the crash.

Owner of the vehicle, Mr. Silver Odjegba, said he had been using it for a year now and had fixed it last week.

“It was the rain that saved souls of life. I will first of all thank God for saving us. I am a task force member of Delta State Management Committee on Public Motor Parks.

“I was called to distribute foodstuffs to people and picked three other vehicles. The rain started falling. Immediately, we left there, we just saw Dangote truck pick up the whole vehicles. You can see the foodstuffs on the ground. The other cars are damaged, but this is the worst,” the motorist said.

Asked what he intends to do, Odjegba who appeared distraught, said “if they can give me my vehicle, I will be okay. The other ones can be maintained if there is money.”

The owners of the other cars, a wine coloured Toyota Picnic and two Volkswagen Ventos, which were affected in the crash, are Friday Akpobaro, Patrick Super and Alex Enunurarhe.

According to Enunurarhe, the driver of the truck immediately took to his heels after the accident but was later apprehended and is being detained at the police station.

He added that “the Dangote trucks were two, it’s like they were racing. After the accident, the driver took off, but people chased him and caught him. The other truck driver sped off too but he was caught in Ughelli and he is at the station there.”

It was also learnt that the spot of the accident is a usual motor park for taxis running the Agbarho/Ughelli Expressway.

“Transporters used to load passengers going to Ughelli from that spot. The passengers will sit inside and wait until the vehicle is full.

When The Nation visited the scene, three of the vehicles had been reportedly towed to the Agbarho Police Station.

Crushed peppers, tomato and garri were also sighted at the scene of the accident.

Efforts to get the Delta State Police Command to comment on the development proved futile.

Only one million families will get N20,000 palliative – FG