BUSTED! Man films wife having sex with his best friend in their home [PHOTOS]
Advertisement 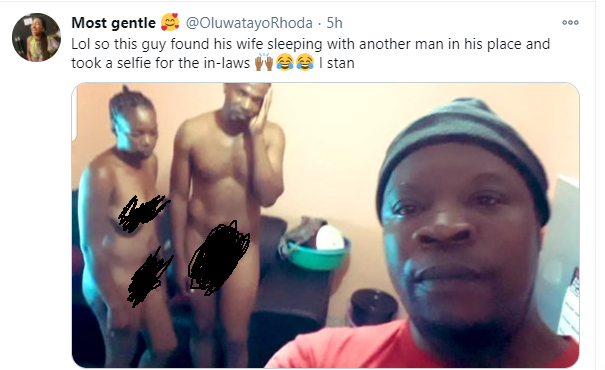 A selfie a man took after he reportedly caught his wife sleeping with his friend in their home, has gone viral across social media platforms.

A Nigerian Twitter user, @oluwatayorhoda who shared the photos alleged that the man took the selfie for his in-laws after he caught his wife in the act of adultery, and decided to film the experience for his in=law’s pleasure.

Lol so this guy found his wife sleeping with another man in his place and took a selfie for the in-laws, I stan

Lol so this guy found his wife sleeping with another man in his place and took a selfie for the in-laws 🙌🏾😂😂 I stan pic.twitter.com/n4B3rqrPJk

Adultery is extramarital sex that is considered objectionable on social, religious, moral, or legal grounds.

Although the sexual activities that constitute adultery vary, as well as the social, religious, and legal consequences, the concept exists in many cultures and is similar in Christianity, Judaism and Islam

Man jailed for impregnating his own daughter in Ondo state