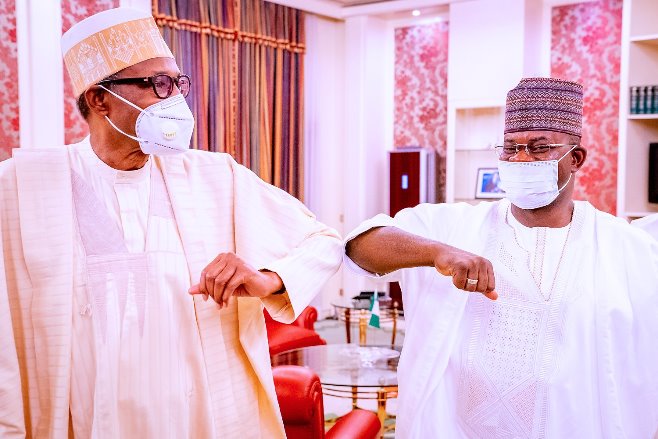 President Muhammadu Buhari, on Thursday, has received Governor Yahaya Bello of Kogi State, at the State House in Abuja.

The Personal Assistant to the President, Buhari Sallau, announced this on social media, also shared photographs from the meeting.

“President @MBuhari receives Governor of Kogi State, Alhaji Yahaya Bello and with them is the Chief of Staff, Prof Ibrahim Gambari during a close-door meeting over the suspension of Food dealers Strike at the State House Abuja,” Sallau titled the photographs.

Governor Bello had played a part in the suspension of the food blockade which kept foodstuff in the North from crossing down to the South.

In accordance with the former Minister of Aviation, Femi Fani-Kayode, the restriction was lifted after Bello held a series of meetings with significant shareholders.

Fani-Kayode tweeted, “Over the last three days His Excellency Governor Yahaya Bello of Kogi state presided over a series of crucial meetings on the food embargo against the South with Alhaji Muhammed Tahir (the President of the Amalgamated Union of Foodstuffs & Cattle Dealers of Nigeria and their Chairmen from all the 36 states and the FCT), Dr Awwal Abdullahi Aliyu (the President of the Northern Consensus Movement), Alhaji Abdullahi Mai Agogo (Sarkin Yaki Buhari), Alhaji Shettima Yerima & I. We worked extremely hard & well into the early hours of each of the mornings on the assignment given to us.

“In the end, we give thanks to God that we achieved all our objectives. Amongst them was the fact that we averted a major crisis, we ensured there were no reprisal killings of southerners in the north after the Shasha killings.

“We ensured that there was no tribal war, we ensured that the food embargo placed on the South by the Union was lifted, we stabilised a very tense and dangerous situation which had the potential of tearing our nation apart in a very violent way and we brought peace and unity to the country.”