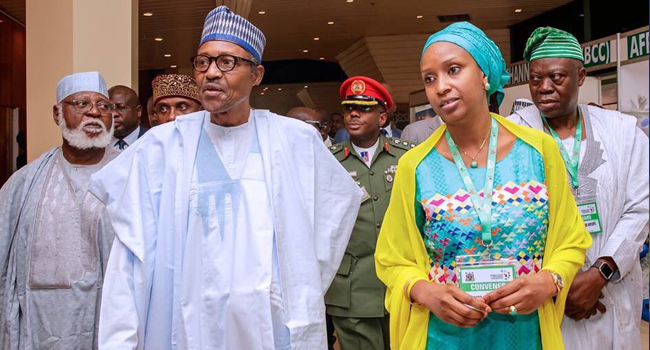 President Muhammadu Buhari has begun an investigative process over non-remittance of about N165bn operating surplus to the Consolidated Revenue Fund by the Nigerian Ports Authority.

This development is connected to the recent suspension of the Managing Director of the agency, Hadiza Bala-Usman.

The President had approved that the Managing Director, Hadiza Bala Usman step aside while the investigation is carried out. Mr Mohammed Koko will act in that position.

Documents sighted on Friday showed that the government figured out discrepancies in the remittance of operating surpluses by the NPA to the Consolidated Revenue Fund for two consecutive years under the leadership of Bala-Usman.

Findings indicated that a total of about N73.61bn (N56.3bn in 2017 and N17.31bn in 2018) realised within the two-year period was not remitted to the CRF as expected by the government, although the suspended NPA boss provided explanations to the contrary.

Also, the Federal Ministry of Transportation in a May 4, 2021 letter to the President claimed that the NPA failed to remit N165.32bn to the CRF from 2016 to 2020 and called for an investigation and audit of the financial accounts of the authority

But in a letter, with reference MD/17/MF/VOL-XX/541, dated May 5, 2021 and addressed to the Chief of Staff to the President, Bala-Usman said the NPA was aware of Buhari’s approval for the Federal Ministry of Transportation to conduct an audit of the accounts of the NPA and its remittances to the CRF.

The letter was entitled, “Re: Request for the record of remittance of operating surplus to the Consolidated Revenue Funds account by the Nigerian Ports Authority.”

In the letter, she explained that the audited financial statements of the NPA provided operating surpluses in 2017 and 2018 that were contrary to what were arrived at by the Office of the Chief of Staff to the President.

The letter stated that the presidential approval for the audit of the NPA accounts arose from a correspondence between the Budget Office of the Federation and the Federal Ministry of Transportation where the budget office conveyed to the FMoT an observed shortfall of the authority’s remittances to the CFR.

Bala-Usman said, “We wish to state that the authority’s basis for arriving at the operating surplus on which basis the amount due for remittance to the CFR is guided by the Fiscal Responsibility Act 2007 as amended.

“It is further based on the statutory mandate Part 1, S.3(1) (b) &(d) whereby the FRC issued a template for the computation of operating surplus for the purpose of calculating amount due for remittance to the CRF.

“Accordingly, the figures so provided by the Budget Office of the Federation as the operating surplus for the respective years on which basis they arrived at the shortfall are derived from submission of budgetary provision not the actual amounts derived following the statutory audit of the authority’s financial statements.”

She argued that in line with the template issued by the Fiscal Responsibility Commission, the accessible operating surplus of the authority stood at N51.09bn and N42.51bn for 2017 and 2018 respectively.

“Accordingly, the authority consequently made a remittance of N42.415bn and N33.969bn for the years 2017 and 2018 respectively for the full amount required as remittance for the period.”

On remittances for 2019 — 2020, the suspended MD said the audit of the 2019 financial statement had been completed and awaiting consideration of the authority’s board at which point the final figures for the 2019 operating surplus would be determined for consequent computation of the amount due for remittance to the CFR.

“But thus far, the authority has made a remittance of N31.683bn for the 2019 remittance. The sum of N51.049bn has also thus far been remitted for 2020, while awaiting the audited financial statement to determine the final amount required for both 2019 and 2020 at which point the authority will make the payment of the balance as required,” Bala-Usman noted.

She stated that based on the above, the authority wished to clarify that the computation of its remittances to the CFR were concluded from audited financial statements using the template forwarded to the authority from the Fiscal Responsibility Commission and not budgetary provision.

“The authority has remitted the full amount due to it to CFR for the periods 2017 and 2018 arising from the operating surplus derived from the audited financial statement for the period totaling N76.384bn as evidenced in attached treasury receipts,” Bala-Usman said.

She said the NPA wished to request the Chief of Staff and the Office of the Accountant-General of the Federation who were the statutorily custodian of status of payment to the CRF to provide clarification on the above so as to establish the true position of the authority’s remittances to the CFR.

Insecurity is the fault of past leaders – Amaechi