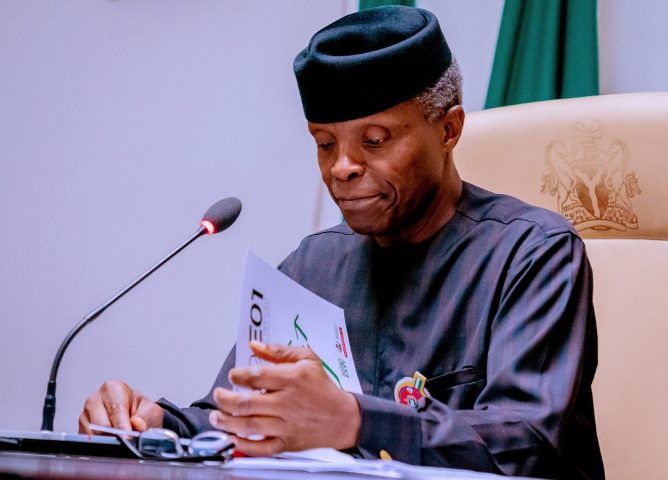 President Muhammadu Buhari, Senate President, Ahmad Lawan, the Speaker of the House of Representatives, Femi Gbajabiamila and a national leader of the All Progressives Congress, Asiwaju BolaTinubu, have lauded the Vice President, Prof. Yemi Osinbajo, on his 64th birthday celebration, which comes up today.

Buhari in his message on Sunday portrayed Osinbajo as a dependable and committed deputy.

The message of the President was enclosed in a statement by his Senior Special Assistant on Media and Publicity, Garba Shehu, tagged, ‘President Buhari celebrates Vice President Osinbajo at 64, describes him as a reliable and dedicated deputy.”

The statement cited the President as saying, “I’m proud to have selected Osinbajo as my running mate and he has given a good account of himself since our journey began in 2015.

“The Vice President is a cool-headed gentleman who puts the interest of Nigeria above other narrow considerations.

“Vice President Osinbajo is an incredibly patient politician who demonstrates remarkable intellectual and mental energy in the discharge of his duties.”

In addition, Senate President, Ahmad Lawan in a statement through his media aide, Ola Awoniyi, on Sunday stated, “His Excellency, Professor Osinbajo, has made his marks in his many fields of endeavour and particularly in the administration of our great nation.

“I pray that God Almighty will continue to imbue him with wisdom and good health as he ably supports President Muhammadu Buhari in their patriotic mission to transform Nigeria and unite its people in happiness and prosperity.”

Similarly, the Speaker of the House of Representatives, Femi Gbajabiamila, in a statement on Sunday, declared that Osinbajo had for many years committed himself to serving humankind, serving diversely as a lecturer, pastor and a politician with good reputation.

Gbajabiamila recollected some of Osinbajo’s “laudable contributions to the development of Lagos State” when the VP worked as the Attorney General and Commissioner for Justice for eight years.

The Speaker said, “His Excellency, the Vice-President, Prof Yemi Osinbajo, is one Nigerian that should be celebrated at every point in time, but the occasion of his 64th birthday calls for more celebration.”

Furthermore, Tinubu in a statement by his media team stated that the Vice President demonstrated the best qualities of a public servant who endeavoured to do his best for his country.

The statement read in part, “Prof. Osinbajo has shown great character, intellect, and professional knowledge in serving Nigeria and in supporting President Buhari and his agenda.

“While celebrating his birthday, we also urge this man of vision and diligent work ethics to continue ever forward by recommitting himself and his ample talents to the betterment of this nation and its people.”

Oluyemi Oluleke “Yemi” Osinbajo GCON was born 8 March, 1957. He is a Nigerian lawyer and politician who is currently serving as the Vice President of Nigeria, in office since 29 May 2015.

Osinbajo graduated from the University of Lagos with a Degree in Law in 1978. In 1979, he completed the mandatory one-year professional training at the Nigerian Law School whereon he was admitted to practice as a Barrister and Solicitor of Nigeria’s Supreme Court.

In 1980, he attended the London School of Economics, where he obtained a Master of Laws degree.

Osinbajo is the Pastor in charge of the Lagos Province 48 (Olive Tree provincial headquarters) of The Redeemed Christian Church of God.

He has received several awards which include, State Merit Award in 1971, the School Prize for English Oratory, 1972 amongst others.

Osinbajo is happily married to Dolapo (née Soyode) Osinbajo, a granddaughter of Obafemi Awolowo. They have three wonderful children.