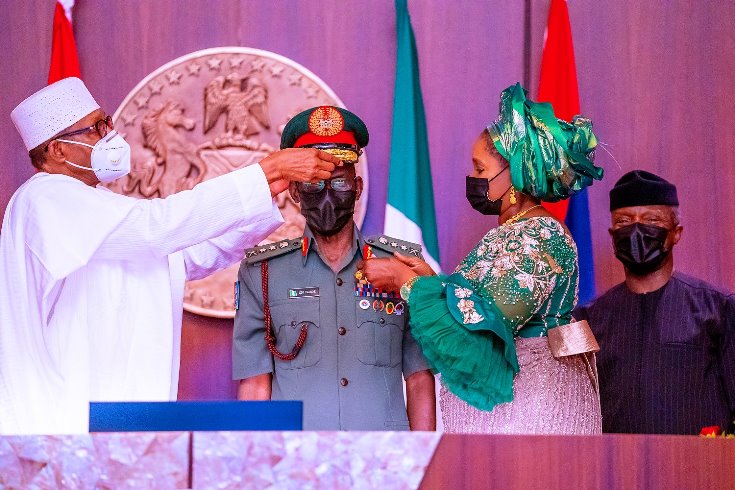 The ceremony, which occurred at the Presidential Villa in Abuja happened days after the National Assembly confirmed the nomination of the service chiefs.

Soon after the event, President Buhari revealed on social media that the service chiefs have his support and that he has entrusted them to guarantee peace and security in Nigeria.

He tweeted, “I have charged the new Service Chiefs to keep in mind that the nation is looking to them for rapid relief. They must identify competent officers irrespective of seniority and paper qualifications, and work with them to secure this country. As C-in-C I am backing them 100 per cent.

“As I assured at our last security meeting, I have taken responsibility as C-in-C for them to go out into the fields and every part of the country, to ensure peace and security. I have accepted responsibility for all actions taken in fulfilment of the mandate to secure Nigeria.”

Vice-President Yemi Osinbajo; Secretary to the Government of the Federation, Boss Mustapha; Minister of Defence, Major-General Bashir Magashi (retd.); and Chief of Staff to the President, Ibrahim Gambari, among other top government officials attended the occasion.