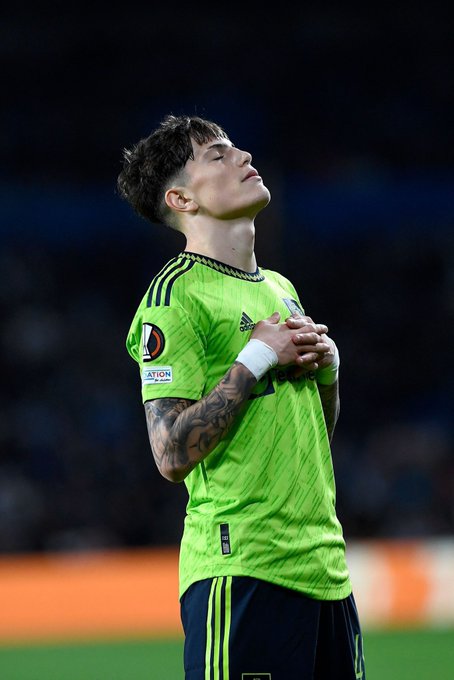 Alejandro Garnacho may have been Manchester United’s hero on Thursday night to secure a somewhat bitter victory against La Liga side Real Sociedad, Red Devils midfielder, Bruno Fernandes has come into the open to criticize the Argentine’s mentality.

The Portugal international spoke about Alejandro Garnacho not being given the chance to show fans his true abilities owing to the Argentine’s own machinations during the early hours of the season in pre-season.

Alejandro Garnacho’s attitude issue, according to Manchester United midfielder Bruno Fernandes, is the reason he didn’t receive chances in the team early.

On Thursday night, Garnacho scored his first goal as a senior for the Red Devils as they defeated Real Sociedad 1-0 in the Europa League.

Under Erik ten Hag, the 18-year-old has seldom played this season.

The midfielder did not merit a starting position until he showed signs of development, according to Fernandes.

“At the beginning of the season he was not at his best. In the [pre-season] tour he didn’t have the best attitude that he should have, and that’s why he didn’t get his chances until now.

“He’s getting his chances because he’s training better, he’s got a different attitude and he’s deserving of his chances,” Fernandes told BT Sport.

Though Alejandro Garnacho may have turned up to score the winner for Manchester United from a rare Cristiano Ronaldo assist this season, the Red Devils still face the heavy task of having to face the big sides coming from the Champions League in the Round of 32 play offs.

This makes it quite bitter sweet seeing as they finish second against a Real Sociedad to play an extra game that could see them face either Juventus, Barcelona, Ajax or Sevilla in the very early stages of the knock out.

A lot of these games carry its own narratives due to some sort of history Man United share with these clubs.