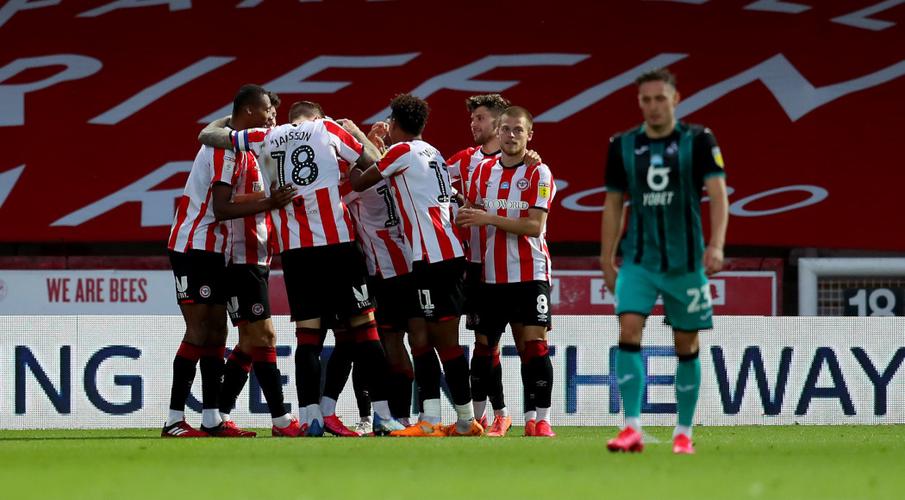 Brentford booked their place in the Championship play-off final as they powered to an impressive 3-1 win against Swansea on Wednesday.

Thomas Frank’s side trailed 1-0 after Sunday’s semifinal first leg, but they hit back to mark the last match at their Griffin Park stadium with a 3-2 aggregate success.

Ollie Watkins canceled out Swansea’s advantage in the opening minutes and Emiliano Marcondes doubled stylish Brentford’s lead before the break.

Bryan Mbeumo bagged their third goal after half time and Rhian Brewster’s strike was too late to spark a Swansea revival.

Brentford will face local rivals Fulham or Cardiff in the playoff final at Wembley on 4 August.

Successive defeats at the end of the regular season ruined third-placed Brentford’s hopes of automatic promotion to the Premier League.

But the unfashionable west London club, forever in the shadow of neighbors Chelsea, remains in the hunt to reach England’s top-flight for the first time in 73 years.

Brentford owner Matthew Benham has introduced an analytical-based approach off the field, overseen by two co-directors of football, to make the most of their meager resources in comparison to the Championship’s wealthier clubs.

It has proved a successful formula and Brentford are now just one win away from a lucrative £170 million place alongside Chelsea, Liverpool, and company in the Premier League.

That would be the perfect way to say farewell to Griffin Park, the club’s home since 1904, as Brentford prepare to move into a new stadium next season.

Although the ground was empty due to the coronavirus, Danish boss Frank had called on his players to deliver “one last magical moment” at the old place and Watkins rose to the occasion in the 11th minute.

Breaking quickly from a Swansea corner, Brentford cut through the visitors’ defense as Watkins ran onto Mathias Jensen’s precise through-ball and slotted a clinical finish under Erwin Mulder.

Brentford had been too conservative in the first leg, but they were surging forward with poise and purpose this time and doubled their lead in the 15th minute.

Said Benrahma lofted his cross into the penalty area and, with Swansea’s defense slow to react, Marcondes had time and space to guide his header past Mulder.

Conor Gallagher was close to dragging Swansea back from the brink when his shot was pushed away by David Raya.

Brentford hadn’t won a single playoff match in 11 previous attempts dating back to 2002.

But the Bees were a constant danger and Benrahma’s low effort hit the inside of the post moments later.

Frank’s team made it three less than a minute after the interval.

Brentford’s Rico Henry had been sent off in the first leg, but he was available to play after the red card was quashed on appeal.

Making the most of his reprieve, Henry tore down the left-wing and whipped over a cross that Mbeumo met with a superb volleyed finish.

Brewster, on loan from Liverpool, pounced on a mistake from Pontus Jansson to lob Swansea’s goal in the 78th minute, but Brentford held on.

Why footballers get more attention than presidents – Paulo Dybala