Court strikes out SERAP's lawsuit against Lai Mohammed and NBC 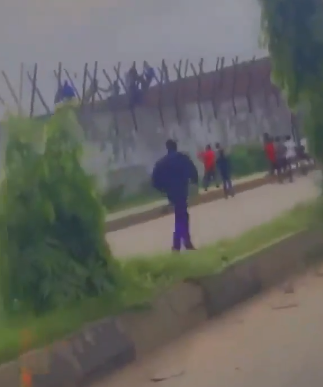 According to reports, suspected thugs hijacked the peaceful end SARS protest, stormed the prison facility, and overpowered the prison officials before setting the prisoners free. One of the prisoners who escaped said he has been awaiting trial for two years.

See videos below as full details will be made available shortly.

Jailbreak in Edo!
I hear thugs hijacked the #EndSARS protest.
Who's in Edo, how true is this please? pic.twitter.com/k0H8LuSTVE

Prison break in Benin?
This is not why we're here.#EndSARS pic.twitter.com/E9NnFNF5t5

Meanwhile, protesters demanding an end to police brutality have blocked the two entrances of the Central Bank of Nigeria (CBN) head office in Abuja.

Chanting anti-government songs and wielding different placards, the protesters have vowed to prevent activities at the nation’s apex bank on Monday.

The protesters packed vehicles in front of the main gate of the CBN headquarters, blocking movement in and out of the premises and from connecting roads.