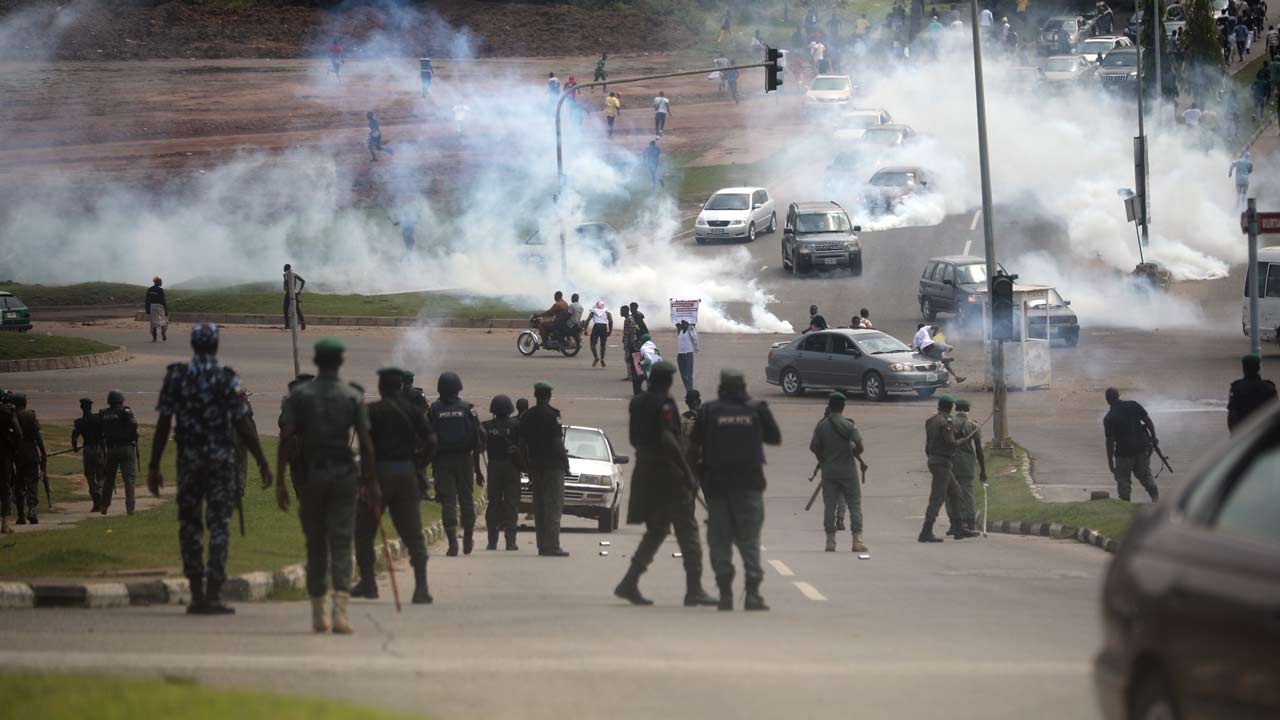 
Young Nigerian Protesters have arrived at the Gani Fawehinmi Park in the Ojota area, the venue of the June 12 protest in Lagos State, TopNaija reports.

This is despite the heavy presence of security operatives at the park. Operatives of the Rapid Response Squad have surrounded the Gani Fawehinmi Park in Ojota, the venue of the June 12 protest in Lagos State.

More than three Hilux Vehicles and two armoured tanks were seen at the venue on Saturday.

People who wanted to enter the park were prevented from doing so by the personnel in the vehicles. Also, in a show of force, one armoured tank and five Hilux Vehicles patrolled the area.

Meanwhile, officials of the Nigeria Police Force on Saturday morning thwarted a June 12 protest in the Gudu area of the Federal Capital Territory when they stormed the area and started firing teargas canisters.

The protest began around 08:30 am and was going on smoothly with the protesters, mostly youths, expressing their dissatisfaction with the state of the nation.

The protesters, who chanted “Buhari must go”, “Say no to injustice”, amongst other solidarity phrases, took to their heels and scampered for safety when the security operatives started shooting.

A journalist who was covering the protest and streaming it on Facebook Live, also ran for cover as the security operatives bombarded the demonstration ground.

Journalists from different media houses are currently on the ground, while protesters have not been sighted.

Earlier, the Lagos State Police Command claimed it is unaware of any planned protests by any group/groups on June 12 Democracy Day.

Meanwhile, an internal tussle broke out on Saturday morning amongst members of the #IStandWithBuhari protest group at the Unity Fountain, Abuja.

Leaders of the group were seen in a heated exchange over the sharing of monetary resources meant for organising the counter protests.

It was learnt that the youths under the aegis of Coalition of Civil Society, Osun State converged on the popular Oke-Fai roundabout. The protesters held banners and placards demanding a better Nigeria.

In Ibadan, Oyo State, Nigerians are protesting over the growing insecurity and poverty in Nigeria.

The protesters, who gathered at the popular Mokola roundabout in Ibadan for the June 12 rally, also held placards demanding an end to bad governance.

Police, army, and the Nigeria Security and Civil Defence Corps were present at the protest ground. Among the inscriptions on the placards are ‘End impunity in Nigeria’, ‘No to fuel price hike’, and ‘We are tired of the killings, insecurity, terrorism, and poverty in the country.

At the moment, TopNaija can confirm that intense protest rallies are ongoing in Lagos, Ondo, Osun, Rivers, and Abuja.