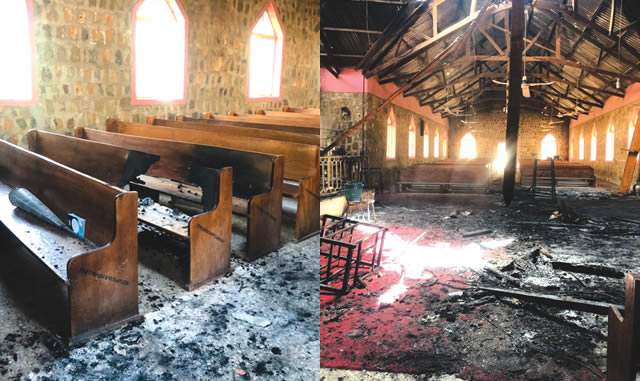 Residential houses, hospitals,  shops and vehicles were also torched by the terrorists. The Army on Sunday confirmed the death of a soldier.

The burnt places of worship are a parish of the Living Faith (aka Winners Chapel) and Ekklesiyar Yan’uwa, a Nigeria (EYN) church.

But as the level of insecurity rises nationwide, a former Head of State, Gen. Yakubu  Gowon, said: “Prayer can solve  problems better and  faster than generals  and soldiers can do with physical weapons.”

Governor Ahmadu Fintiri on Sunday visited Garkida to sympathise with the people.

However, the 23 Armoured Brigade of the Nigerian Army in a statement also said another soldier was injured by troops of 232 Battalion,  who engaged the insurgents in gun duel.

The statement by Major Haruna Mohammed Sani, Assistant Director of Army Public Relations, the 23 Armoured Brigade,  indicated that the destruction would have been more extensive, but for the intervention of the troops who killed some of the insurgents.

The statement reads:   “Gallant troops of 232 Battalion of 23 Armoured Brigade under Operation Lafiya Dole deployed in Garkida, Gombi LGA of Adamawa State, had thwarted a planned criminal attack on the peaceful town on February 21,  2020, by some criminal Boko Haram terrorists.

“The terrorists besieged the town in about seven gun trucks and a number of motorcycles, setting some buildings ablaze and causing unrest within the community.

“Instinctively, the gallant troops mobilised and intercepted the criminals’ advance and engaged the marauding criminals unleashing high volume of fire, leading to the elimination of several of the criminals while others withdrew in disarray, many of them with gunshot wounds as evident in the trails of blood along their withdrawal route.

“Regrettably, one gallant soldier paid the supreme price while another soldier was wounded in action. The wounded   soldier has since been evacuated to a military medical facility and is positively responding to treatment.”

The statement added that the Commander of the 23 Armoured Brigade, Brig. Gen. Sani   Mohammed, who visited the troops in Garkida on Saturday, congratulated them  for their fighting spirit, but warned them to be vigilant as the terrorists  may plan a reprisal  “due to the casualties they suffered.”

Gen.  Gowon and the Emir of Ilorin, Alhaji Ibrahim Sulu-Gambari, have advocated prayer as the surest means to ending the spate of killings and other forms of violent crimes in the country.

Gowon, who is the National Chairman and Convener of ‘Nigeria Prays’, spoke in COCIN LCC Millennium Quarters, Yelwan Kagadama , venue of   the Northeast Zonal Prayer rally in Bauchi, Bauchi  State.

”Let us be assured that our prayers are not in vain. I can say this with every authority that prayer can solve problems better than faster than generals and soldiers can do with physical weapon,” he told the rally participants.

He lamented the spate of insecurity and activities of insurgents and called on  God to guide President Muhammadu Buhari and his deputy, Yemi Osinbajo, in tackling the problems.

“I have no doubt in my heart that God will honour our collective prayers and intercession for our dear nation and heal our nation of our afflictions,” the former Head of State added.

Gowon thanked  the leadership  of  CAN,  Bauchi State chapter, church leaders across Northeast   and the entire body of Christ in Bauchi state for their collective resolve to stand in the gap and fervently pray for peace, prosperity and security in the nation.”

Also on Sunday,  hundreds of people in Ilorin Emirate, Kwara State,  prayed divine intervention in tackling the security problems in the country at the palace of the Emir, Alhaji Ibrahim Sulu- Gambari.

The intercession was part of the special prayer organised by Sulu- Gambari to seek God’s guidance for 85 professors of  Ilorin Emirate extraction.

The Chief Imam of Ilorin, Sheik Mohammed  Salihu, led other clerics to ask  God to give Nigerian leaders wisdom and the will to win the anti-insurgency and banditry war in the troubled states.

The emir acknowledged and praised the efforts of President Muhammadu Buhari in curbing insurgency and other forms of crimes.

He, however, maintained that what the nation required to overcome the security challenges was divine intervention through prayers by the leaders and adherents of the two major religions in the country.

“I commend President  Buhari’s efforts at ending insecurity in the country, but of paramount importance is the need for us to seek divine intervention through prayers in overcoming the insurgents, “Sulu- Gambari said.

The emir also hailed the steps taken so far by the Federal Government to forestall the import of Covid-19(Coronavirus) and spread of Lassa fever in the country.

Sulu- Gambari hailed the professors and urged them to use their vantage positions to better the lots of Ilorin Emirate, Kwara and Nigeria in general.