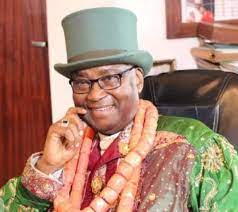 Alabo Tonye Graham-Douglas, died a week ago in Abuja at the age of 82, he was at different times the Minister of Social Development, Youth and Sports, Aviation as well as Culture and Tourism.

However, the Governor of Bayelsa State, Douye Diri, has, expressed sadness over the demise of the prominent Ijaw leader and former Minister of Labour and Productivity as he commiserated with the family of the demise of Abonnema community in the Akuku-Toru Local Government Area of Rivers State.

In a condolence message to the family of the deceased, the Bayelsa governor said Graham-Douglas belonged to the pantheon of the Ijaw elite that made the ethnic group proud, he also described him as a foremost nationalist and cultural icon.

He urged the family to take solace in the fact that Graham-Douglas lived a fulfilled and accomplished life that impacted, not only those whose path crossed with his but indeed, the whole of the Ijaw nation and Nigeria.

Diri noted that the former four-time minister and exceptional politician would be greatly missed for his frankness, forthrightness, and fatherly disposition.