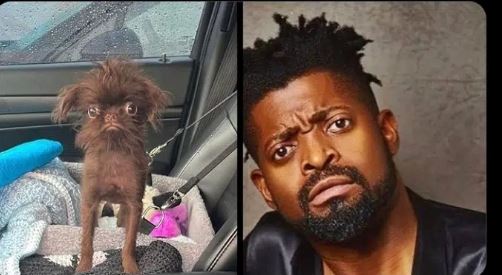 Popular Nigerian comedian and actor, Bright Okpocha, better known as Basketmouth has reacted to a meme that went viral of him being compared with a Dog.

Within the week, a Twitter user took to the platform and shared a photo of the comedian, Basketmouth with a Dog of supposed similar appearance.

The facial expression of the dog caught the attention of many as they compared its face with that of the comedian.

See the photo below;

Reacting to it, Basketmouth reshared the photos on hie social media pages as he outcry that his haters are at it again.

Basketmouth took to the platform as he jokingly says the creator of the meme will not to find peace.

The comedian also vowed to come after the fellow no matter how long it takes for him to do so.

He tweeted, “The hater that did this will not find peace..I’m coming for you, lemme find fuel 1st… max 2 months. You’re mine”.

See his posts below;

TopNaija recalls that Basketmouth had shocked many when he delved into the music industry.

Taking to his Instagram page, Basketmouth revealed that most people did not know that music was his first love before acting and comedy, but he decided to do it backwards.

According to Basketmouth, he could not go into music as the timing was not suitable for him, and he had not met a producer that could see music the way he saw it.