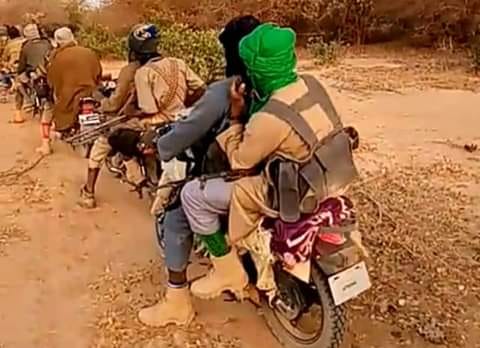 A high ranked security personnel in Zamfara State has disclosed that bandits escaping from the onslaught of security operatives in Zamfara and Katsina States have relocated to communities in the axis of Shanono, Gwarzo and Kabo Local Government Areas of Kano State.

According to the security personnel, the bandits are suspected to have been moving into illegal gold-mining camps Shanono Local Government Area, engaging themselves into illegal mining of gold ore mineral deposits.

“They also use the illegal mining site as accommodation, as the sites operate 24hours on daily basis.

“Furthermore, the bandits are believed to have expanded the illegal mining activities into other illegal mining sites in Gwarzo and Kabo Local Government Areas where Tantelite, columbite and tin minerals are illegally mined.

“It is believed that on the 14th of October, 2021, the suspected bandits on twenty motorcycles were sighted at Kusalla village, in Karaye Local Government Area near NYSC Orientation Camp and Karaye Community School.

“The Joint Task Force operatives responded to the sighting, but no trace of them was found at scene. This poses security threats to the Camp and the school.

“Sudden recent increase in the illegal mining activities at those sites and the sighting at Kusalla village informed the suspected penetration of the bandits into the State to establish themselves at new locations for continuation of their nefarious activities.

“The sites in Shanono Local Government Area were observed with many lister grinding machines to grind the gold ore extracted and then were washed at streams found nearby,” he revealed.

The security operative urged the Kano State Government, to as a matter of urgency, act quickly before more damages would be done by the notorious bandits.

Related Topics:Bandits Escaping From KatsinaIllegal Gold Mining Camps
Up Next

Ede Youth President- Police authorities should apologise for arresting me