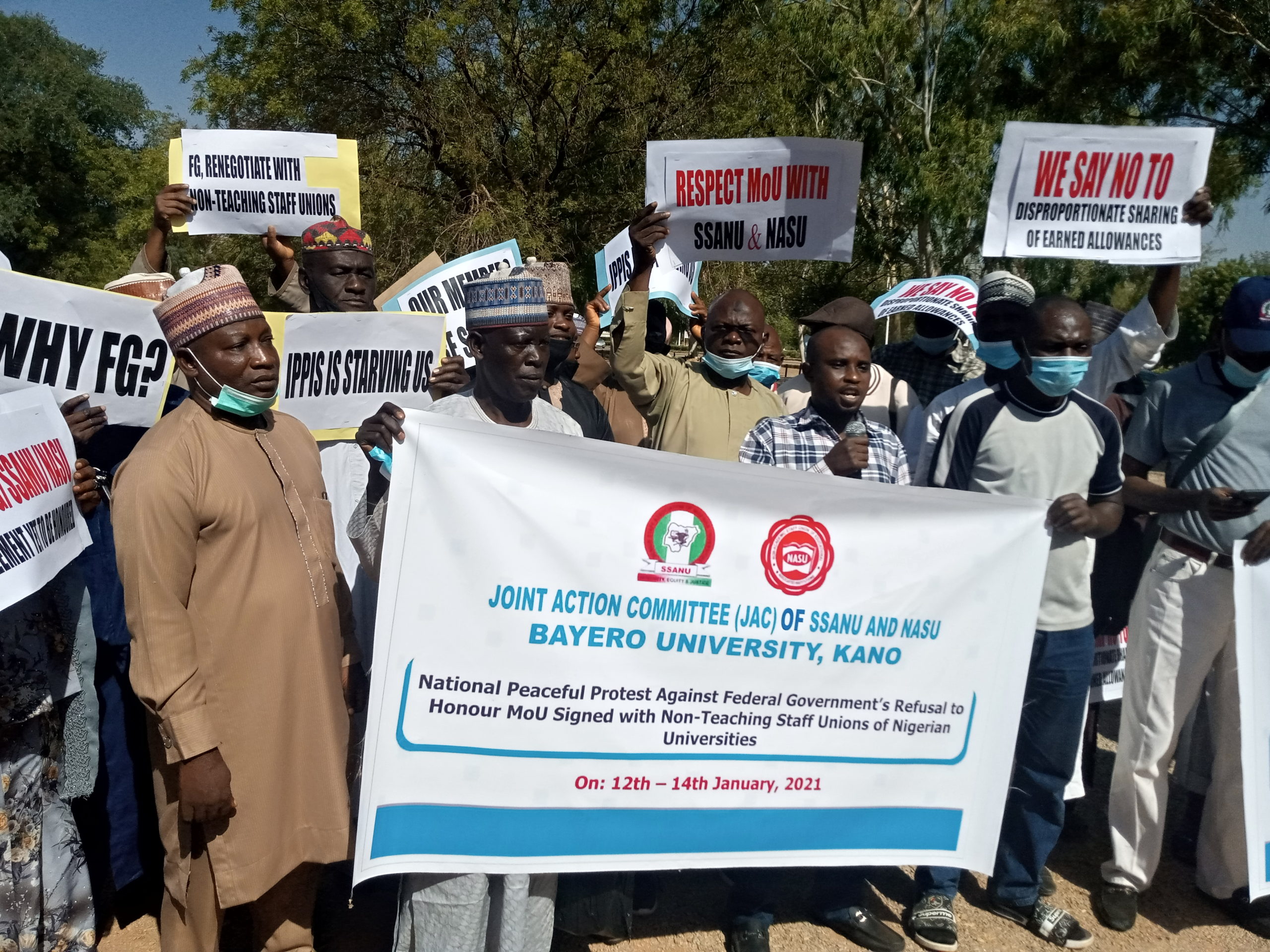 On Tuesday, the non-academic unions in universities and the Academic Staff  Union of Universities differed on the Federal Government’s N40bn earned allowance for the institutions’ workers.

While ASUU President, Prof Biodun Ogunyemi,  in an interview, justified the amount promised lecturers out of the N40bn, non-academic unions described the Federal Government’s sharing formula as illogical and a divide and rule tactic.

The unions spoke as protests by non-academic staff over the  Integrated Personnel and Payroll Information System and the N40bn earned allowance rocked university towns across the country on Tuesday.

The Federal Government had,  on December 22, as part of agreements reached with ASUU,    promised to release N40bn earned allowance to universities. The academic union had on December 24 suspended a strike, which it started on March 23.

But the non-academic unions, which kicked against the N30bn promised ASUU, said the sharing formula was 75 per cent (N30bn) for the lecturers and 25 per cent for other unions.

The General Secretary of the Non-Academic Staff Union of Educational and Associated Institutions, Mr Adeyemi Peters, in an interview on Tuesday,  said the failure of the government to implement the recommendations of the forensic audit report on the earned allowance was the cause of the current crisis over the sharing formula.

Peters said the award of 75 per cent of the fund to ASUU was not based on any logic, noting that it would also breed corruption.

He explained that the audit report of consultants engaged by the Office of the Accountant-General of the Federation recommended the amount each university would earn as well the total amount that should be paid to the unions.

Peters said, “Since 2013, the government has been releasing money, but these releases have been done in a manner that ASUU gets a bigger chunk of what is released. So, the non-teaching staff said the government should conduct a forensic audit of what had been paid so far.

“It was agreed to by all the unions; and the Office of the Accountant-General of the Federation hired some consultants that carried out the forensic audit of what had been released, what had been paid and what was remaining.

“And what we said was that if the forensic report is out, the distribution of the money (N40billion) should be based on the outcome of the forensic report, which probably would have shown how much each staff member has received, and the outstanding and you can use that to determine scientifically the quantum of what each of the union gets, but the government abandoned the report and decided to now say the N40b should be shared 75 per cent to ASUU and 25 per cent to other unions.”

“We said no, that would contradict the idea of the forensic audit. What they are proposing is not based on any logic and it doesn’t portray transparency. That is why we are insisting on the use of the audit report to determine what would be paid to every staff member and what each union would get.”

The NASU secretary said his union did not have any issue with ASUU, but with government which he accused of awarding the sharing percentage randomly.

Also, the President of the National Association of Academic Technologists, Mr Ibeji Nwokoma, in an interview, accused the Federal Government of using divide and rule tactics to polarise the unions.

He stated that the decision to allocate N30b to ASUU was unfair and unacceptable, noting that the government had not disclosed the yardstick for the sharing formula.

Nwokoma stated, “We are not against the government giving any union what they think they should give, but the truth of the matter is that what is sauce for the goose is also sauce for the gander. Our earned allowance has been paid only up to 2011, whereas ASUU has been paid up to 2015 and if you give them N30b, you would now pay them to 2020. So, it is unfair, it is unjust and acceptable. Government is using divide and rule system.

Nwokoma said ASUU was probably being rewarded with the huge sum for going on strike, stressing that each of the unions could ground the university system. We have given the government 14-day ultimatum to review the sharing formula or we would shut down the universities.”

The President of the Senior Staff Association of Nigerian Universities, Mohammed Ibrahim, during the union’s protest at the University of Abuja on Tuesday, said, “If the government remains adamant and the issues are not addressed, JAC (the Joint Action Committee)  will take an action on Thursday.

“We also have our children in the universities.  We hope that government will do the needful before the end of the three-day protest, but if that is not done, which we are not praying for, by Thursday  we will be able to tell the whole world our next line of action.”

Also at UNIABUJA, the  Treasurer of NASU, Sadiat Hassan, in an interview with journalists, said,  “We are protesting against the irregularities in the  IPPIS payment and demanding the renegotiation of our 2009 agreement which has been long overdue.

“We are also protesting against the non-payment of our earned allowances and injustice that was done by the Federal Government in the distribution of the earned allowance because they gave a particular union 75 per cent and other unions 25 per cent.

“This is against the agreement reached in October (last year) that the money should be for all the unions. So, we expect them to do justice to everybody.”

Also, members of SSANU at the  Federal University Lokoja , Kogi State as early as 8am  on Tuesday embarked on a peaceful protest.

The Chairman of SSANU/JAC in the university, Uche Onyedi, threatened that the unions would begin a nationwide strike, if government failed to meet their demands.

Addressing journalists during a  protest at the Federal University, Gusau, Zamfara State, the Chairman of JAC of the university, Mallam Muddasir Musa, said, “We tried to meet with them (government) and solve the problems, but it never worked.

Meanwhile, the Joint Action Committee including the Non-Academic Staff Union of Universities and Senior Staff Association of Nigeria Universities, on Wednesday, said the unions might be forced to embark on strike if the Federal Government fails to meet their demands by Thursday.

The unions started a three-day nationwide protest on Tuesday over the Integrated Personnel and Payroll Information System and the N40bn earned allowance.

While ASUU President, Prof Biodun Ogunyemi, justified the amount promised lecturers out of the N40bn, non-academic unions have since described the Federal Government’s sharing formula as illogical and a divide and rule tactic.

SSANU and NASU are against the N30bn promised ASUU, saying the sharing formula was 75 per cent (N30bn) for the lecturers and 25 per cent for other unions.

Speaking on Wednesday, Ibrahim said, “The major aim of our protest is to sensitise government that look, you have a problem. The problem is that you are not honouring agreements. From agreements you have moved to MoUs and MoUs are becoming just a charade – you sit down and take tea and the MoUs will never see the light of the day.

“After day 3, we will meet and appraise the situation and let the world know our next line of action. But whenever you see the two unions –NASU and SSANU– meet, any decision we take will be in the best interest of the students and our membership.”

The SSANU president said the option of industrial action cannot be overruled, adding that the government caused the problem at hand.

Related Topics:featurenon-academic unions
Up Next

How students threatened to beat up lecturers – UNIBEN VC reveals