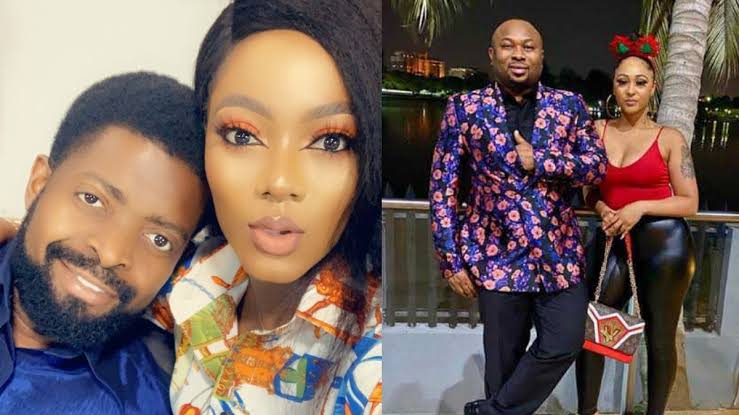 Elsie Okpocha, the wife of Basketmouth, Nigerian comedian, has taunted and mocked Rosy Meurer for referring to her husband as “Mr Churchill” in a recent video.

Following allegations that she was responsible for the failed marriage between Tonto Dikeh and Olakunle Churchill, Rosy had put out the video wherein she denied the claims while addressing other issues.

In the short video, she also referred to her husband as “Mr Churchill.”

Wondering why Rosy kept calling her husband by his name, Elsie took to her Instagram story on Friday to question her motive.

She also asked if Rosy was ashamed to address him as her husband.

“Mr Churchill this, Mr Churchill that… Aunty say ‘my husband’ naaa, abi are you ashamed to call him that??????? Wahala just be like bicycle,” she wrote.

Meurer has continued to face criticism since Churchill introduced her as his wife on her birthday– nearly four years after she had initially denied being in a relationship with him.

Churchill and Tonto Dikeh met in 2014 at Escape Nightclub in Lagos during the birthday party of Churchill’s brother. Dikeh became pregnant six months after they started dating and they married on 29 August 2015 at her hometown Rumukani, Rumukwuta, Rivers State. In 2016, they had a son together and divorced the following year in July 2017.

Ifu Ennada shares spicey photos from her vacation in Maldives