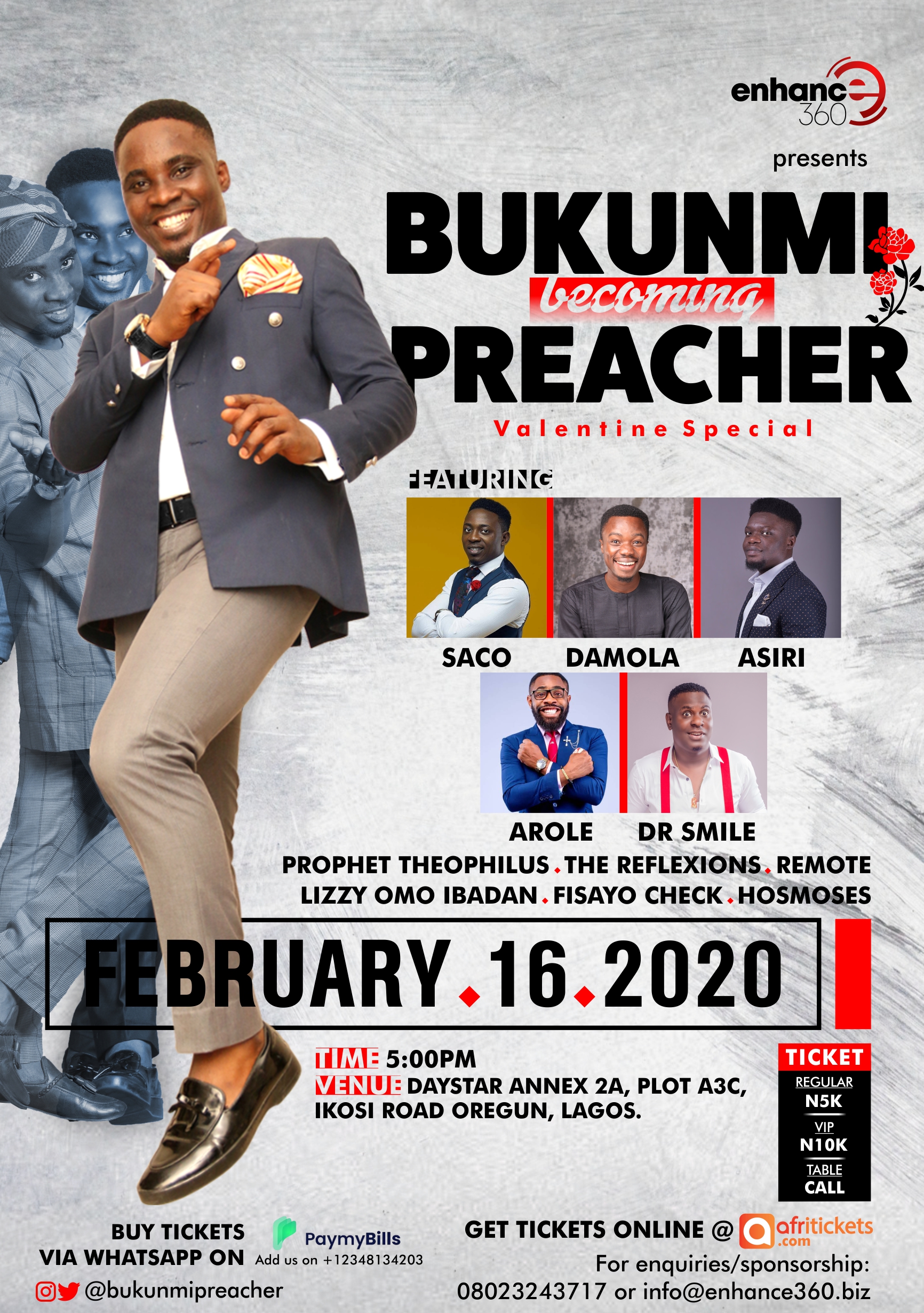 BUKUNMI becoming PREACHER is a journey of love and relationships. It is a live comedy show incorporating theatrical and operatic elements steeped in the valentine season of love and romance. It is a coming of age kind of show as it chronicles the talent’s sojourn from the city of Ibadan as a boy to becoming a Comedian, MC and a man of love in Lagos.

What makes the show unique is the relatable African experiences that would be infused such as the Amala/Buka virtual and real experiences, folk/contemporary music, theatrical and operatic elements. There would also be cameo appearances by various comedy influencers in the theatrical enactments; other comedians would have stand-up performances at intervals during the show, while the folk/contemporary music would serenade the as well.

@fisayocheck should just help drink hot water till show day! We are singing high tunes! #becomingpreacher But tickets https://www.afritickets.com/event?id=5172 or link in bio

It would be crowd puller for various types of audience; ‘the lovebirds’, ‘the single and searching club’, the “we love each other but we need to spice things up” crew, and the ‘let’s go get some laugh gang’.

This show will be hosted by Bukunmi Adelani, popularly known as PREACHER is a fast-rising Nigerian comedian, compere, actor, and host of the RideWithMe show. He is a witty comedian known for his ethical rib-cracking jokes.  His professionalism and clean (family-friendly) jokes adhere many esteemed brands to him.

Experience comedic ecstasy, this Valentine! Ticket for the show is 5k for regular and 10k VIP.

Me that I’m trying to sell #BecomingPreacher tickets! @valerie_dish ❤️❤️❤️ . . You can now Buy ticket via WhatsApp on PayMyBills – Follow this process: Add this number +12348134203, Send: Event Becomingpreacher Or link via my BIO . #funny #naija #tundeednut #viralmemes

The show with all its elements and infusions promises an amazing experience for the live audience while being packaged as a well-coordinated, global standard television show VOD platforms.

TopNaija.ng is an official media partner of the BUKUNMI becoming PREACHER show.