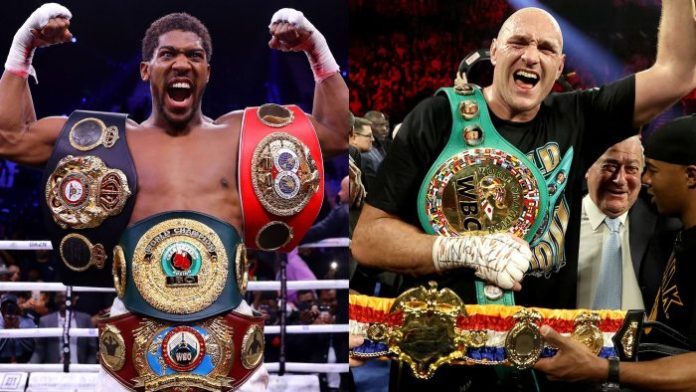 After several months of arduous negotiations between competing promoters and rival champions, the contract for a two-fight deal between Tyson Fury and Anthony Joshua to unify the heavyweight titles has finally been signed.

The widely anticipated fight is likely to hold in Saudi Arabia.

See the stats between Anthony Joshua and Tyson Fury as at today.

Both fighters camp have been negotiating for a match for several months. The terms have now been finalised for the blockbuster battle, with a date and venue to be confirmed.

Unified champion Joshua will put his WBA, IBF, and WBO belts on the line against the unbeaten WBC champion Fury this year.

AJ’s promoter, Hearn, who confirmed the news to Sky Sport said: “All parties have now put pen to paper and we will be working hard over the next few weeks to confirm the site and date for the biggest fight in boxing.”

Joshua‘s Nigerian background can be specifically traced back to the Yoruba people, amongst whom he is of aristocratic rank. His cousin, Ben Ileyemi, is also a professional boxer.

Fury, on the other hand, made his professional debut at the age of 20 on 6 December 2008 in Nottingham, on the undercard of Carl Froch vs. Jean Pascal against Hungarian fighter Bela Gyongyosi (3-9-2), who Fury defeated via TKO in the first round with a combination to head and body.

After 10 years of marriage, see what happens [PHOTOS]

Toke Makinwa retorted a Nigerian man who made advances to her