Akeredolu sworn-in for a second term as Ondo Governor
Advertisement 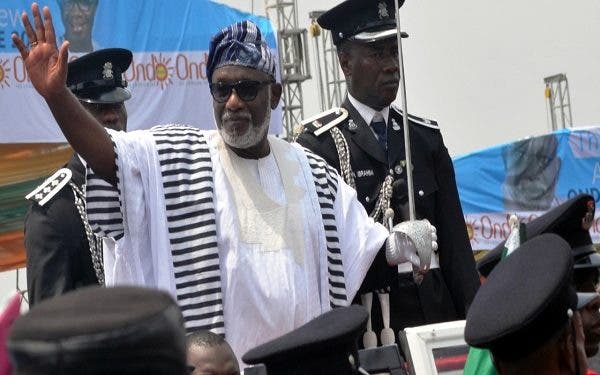 Rotimi Akeredolu, SAN, was sworn in as Ondo State Governor for a second term in office on Wednesday.

He had won against Eyitayo Jegede of the PDP in last year’s governorship poll to win a second term in office.

Akeredolu took his oath of office at precisely 10:48am on Wednesday. He was sworn in alongside his deputy, Lucky Aiyedatiwa.

The event occurred at the International Culture and Event Center, Igbatoro Road, Akure. Just 500 persons were permitted at the ceremony in compliance with COVID-19 protocols.

The oath of office was performed by the Chief Judge of the State, Olarenwaju Akeredolu.

Governors present at the event were Babajide Sanwo-Olu of Lagos State; Kayode Fayemi of Ekiti State; Dapo Abiodun of Ogun State and Gboyega Oyetola of Osun State. Former Governor and APC chieftain, Bisi Akande was equally at the occasion.

Akeredolu was re-appointed governor of the state on October 10, 2020, on the platform of the All Progressives Congress (APC).

He won against the Peoples Democratic Party (PDP) candidate, Eyitayo Jegede, and the current Deputy Governor, Agboola Ajayi, who competed on the platform of the Zenith Labour Party (ZLP).

Oluwarotimi Odunayo Akeredolu, SAN, was born 21 July, 1956 in Owo, Ondo State. He went to Obafemi Awolowo University to study Law, graduated in 1977. He was called to the Nigerian Bar 1978.

Akeredolu is a Nigerian politician and lawyer who is currently the Governor of Ondo State, in office since February 24, 2017. He is a Senior Advocate of Nigeria (SAN) who became president of the Nigerian Bar Association in 2008.

Akeredolu was also a Managing Partner at the Law Firm of Olujinmi & Akeredolu, a Law Firm he co-founded with Chief Akin Olujinmi, a former Attorney General and Minister for Justice in Nigeria. On 21 July 2020, he was declared as the Ondo governorship candidate after the primary elections under the platform of the APC.

He is happily married to Betty Chioma Anyanwu-Akeredolu with four children.

BREAKING: Bawa shows up at Senate for screening as EFCC chairman