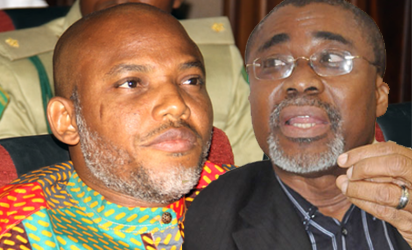 Senate Minority Leader, Eyinnaya Abaribe, has disclosed that the leader of the Indigenous People of Biafra, IPOB, Nnamdi Kanu, and his group never said the election should not hold in Anambra State.

Abaribe said fifth columnists are behind the no election order and not Kanu or IPOB.

Speaking during a town hall meeting with the leadership and students of the Nnamdi Azikiwe University (NAU), Awka, Abaribe said Kanu’s lawyers confirmed that the order did not come from their leader.

There has been tension over the planned conduct of the November 6th governorship election in Anambra State.

Rumours making the rounds have it that IPOB declared that the forthcoming election won’t hold.

However, IPOB has denied giving such an order, stressing that it has nothing to do with Nigeria’s electoral system.

Meanwhile, the separatist group had ordered a sit-at-home in Anambra State, starting from November 5th.

The order is aimed at prevailing on the Federal Government to release Kanu.

Related Topics:AbaribeNnamdi Kanu
Up Next