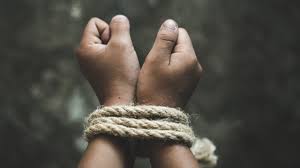 An 8 year old daughter of a community Neighbourhood Watch Group Chairman in Enugu has been kidnapped by suspected armed herdsmen.

The community, Agu-Amede community is located at Isi-Uzo Local Government Area of Enugu State and has a boundary with Benue State.

The community had witnessed several herdsmen attacks including a series of abductions for ransom which were barely reported.

The father of the kidnapped, Mr Sunday Olinya, is the chairman of Agu-Amede community Neighbourhood Watch Group.

The kidnapping occurred on Sunday morning when the suspected herdsmen, numbering about seven, stormed Olinya’s house with AK-47 rifles to attack him but he escaped. His daughter, Nmesoma, was however kidnapped while the kidnappers allegedly ransacked the house and stole some valuables before leaving.

Sources told The Punch that the attack seemed connected with the insistence of Agu-Amede community, which Olinya was also their chairman, that herdsmen should not come to destroy farm crops in their community three weeks ago after over 50 hectares of rice farms that were almost ready for harvest were destroyed by cows.

Narrating the incident, Orinya said “I was sleeping around 1 am on Sunday morning and I heard a bang on the door. I was sleeping in the living room so immediately I woke up. I heard the second bang I stood up and asked who is that? But I got no response.

“I went close to one of the windows and looked outside, I saw two herdsmen with AK-47 rifles positioned to shoot. I rushed to the back door, I equally saw two herdsmen positioned with their AK-47. All the lights in the house were off but the security lights were on and my wife and children were still sleeping in their rooms.

“And they (herders) had positioned themselves around my house. So, the only option available since there was no network to call for assistance was to find a way to escape. Luckily for me, there is one window in the house that had no burglary proof and I had to escape from there.”

He added, “immediately, they noticed that I had escaped they started shooting indiscriminately in my position but I was unhurt. However, in other not to attract much attention, they rushed, broke one of the windows and went inside the house. They ransacked everywhere, collected some valuables including money and my wife’s phone and kidnapped my eight-year-old daughter who was sleeping.

“My wife told me that they looked for her as she overheard them asking my daughter where is her mother. According to her, when they heard the shooting she and my son woke up and went and hide inside one of the rooms but my daughter was still sleeping in her room.”

Olinya has said the kidnappers are demanding N15 million ransom for his daughter’s release.

“They told a family member who was in constant contact with them that they came to killing me and not to abduct my daughter, that I had unfinished business with them.”

When asked what kind of unfinished business he had with them, Olinya said, “I don’t know. What I know is that my community asked them about a month ago not to come to destroy our farm crops. This happened after they destroyed with their cows about 50 hectares of rice farms in Akpouf Agu-Amede.

“So, during the incident, one of the owners of the cows said that his boy was wounded and insisted that he must be treated. Our community sent N50,000 to the Alhaji for the treatment of the boy herder he claimed was injured. Our people didn’t kill their cattle or their people. The same Alhaji had come to my house with other leaders on two occasions with huge money to allow them to graze their cattle in my community which were turned down.”

The State Police Public Relations Officer, Daniel Ndukwe, has confirmed the attack and abduction of the little girl but denied that the attackers were herdsmen.

Ndukwe said, “What we had is a case of alleged abduction of one 8-year-old Nmesoma Olinya (f), on 21/11/2021 at about 3.48 am, by yet-to-be-identified armed hoodlums suspected to be armed robbers, who broke into their residence at Agu-Amede in Isi-Uzo LGA on the said date and abducted her, while her parents escaped. Meanwhile, full-scale manhunt of the assailants and rescue of the victim has since commenced.”