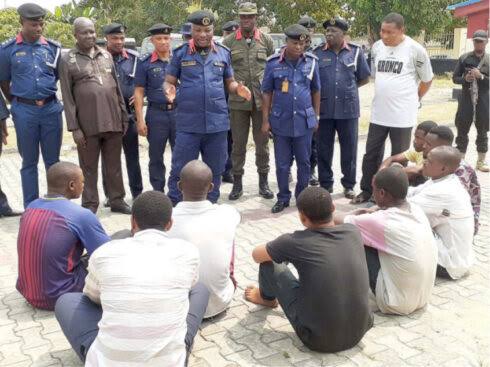 The state Commandant, Adaralewa Michael, disclosed this in a statement issued by the command’s Public Relations Officer, Oluwole Olusegun, and made available to the News Agency of Nigeria (NAN) on Saturday in Ibadan.

Michael, while addressing Heads of Department and Units on the achievements of the command in the year 2021, said others arrested included suspects involved in illegal mining, forgery, stealing, assault and threat to life.

The Commandant said that the command had secured six judgment out of the numerous cases in the court in the year under review.

Michael said that the command’s Peace and Conflict Resolution Unit recorded 340 cases, resolved 290 and transferred one of the cases while 49 of the cases are still pending.

Michael said that the unit was able to settle 35 cases ranging from breach of contract and Agreement while N1,258,000 was recovered and returned to the owner. “The Anti Fraud Unit of the Command have used the Office perfectly to assist citizens in the state who have brought different cases to it.

The commandant said the Disaster Management Unit of the command also recorded lots of achievements through quick response to disaster issues and sensitisation.

Michael commended all the heads of departments and units as well as men and officers of the command on the achievements recorded so far within the period under review.

The commandant urged them not to relent until the state is fully secured for all and sundry in other for the citizens to have a peaceful environment before, during and after Christmas and new year celebrations.

Tinubu, Back A Younger Candidate Up, Osita Ikechukwu Says