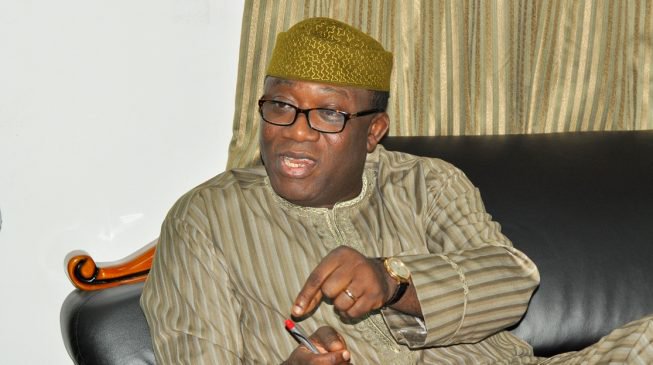 Dr. Kayode Fayemi, the Governor of Ekiti State has threatened to sue the owner of Panic Alert Security System Limited, George Uboh, who accused him of demanding 10 per cent from the $418m judgment debts purportedly owed by states and their local governments in securing the Paris Club refunds.

The judgment debts had risen from various court judgments ordering some contractors and consultants to be paid for certain services and projects executed for the various states and the 774 Local Government Areas.

Some of the claimants were said to be consultants engaged by the states and local governments to secure recovery of funds over-deducted from their allocations between 1995 and 2002 to service the then London and Paris Club loans.

The contractors among the claimants were purportedly engaged to execute certain projects in all the 774 local governments in anticipation that they would be paid from the Paris Club refunds.

Fayemi, however, demanded a forensic audit of the contracts leading to the judgment and the entire indebtedness.

Fayemi, in a letter signed by his lawyer’s firm, Akinboro & Co, described the allegation as false, malicious, mischievous and calculated to cause him to be shunned, avoided or exposed to hatred, ridicule before his colleagues in the Nigeria Governor’s Forum, Nigerians and others worldwide.

Fayemi noted that the allegation had caused him to suffer and continue to suffer severe humiliation, mental and emotional anguish, pain and suffering.

The governor, in the letter, demanded Uboh to retract the publication from his online medium and other platforms and to publish an open apology for seven days with a demand of N5bn.

The letter read in part, “It is clear that your story is a fabricated one considering that you could not even mention the names of the proxies whom you claimed our client sent to you, neither could you produced the purported communications with your phantom or supposed proxy X showed you on his phone. Our client is firmly of the view that if at all the persons you referred to as proxies X and Y exist (which are not conceded) they only exist in your warped or perverted imagination.

“In addition, in view of the false allegations in your publication, friends, admirers, and other well-wishers who used to see our clients as a devout Christian, upright, truthful, decent, and honest person who he is, no longer see him in that light despite all efforts he has made and continued to make to show that the allegations therein were not true.

“Accordingly, we hereby, demand the immediate retraction of the publication of 31st March 2021, from your online and other platform (s) and to publish forthwith on daily basis for seven days an open apology to our client and the NGF for the false and malicious publication.

“In addition, we demand from you the immediate payment of the sum of N5bn to our client for the utterly false and malicious publication. We hereby further notify you that failure or refusal on your part to meet these demands within 14 days from the date hereof, would inexorably leave us with no other option than to commence legal action against you and seek necessary legal redress for and on behalf of our client.”