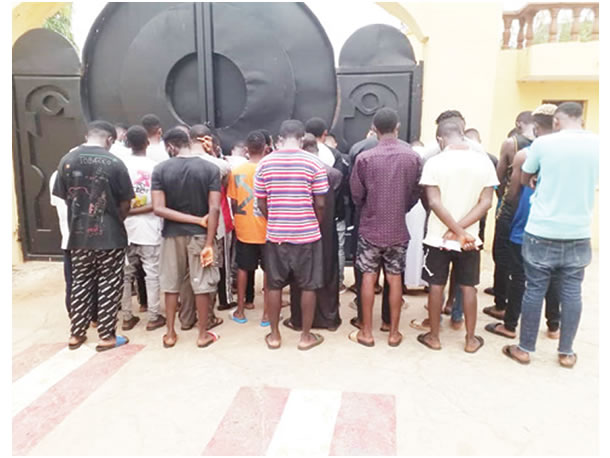 On Wednesday, the Economic and Financial Crimes Commission confirmed that it had apprehended 30 suspects for alleged Internet fraud in various parts of Ilorin, Kwara State, after a raid on a students’ hostel.

A WhatsApp message copied from the EFCC and posted by Da Radio General said “almost all the students at Unigate hostel were arrested by claimed @officialEFCC Ilorin men around 3AM and some have exams today.”

Another message from Rotimi Oshin of Royal FM Radio read, “There is a video and the people are in EFCC jacket we will like to know if this is a standard procedure and also if the EFCC Act allows operatives to mount a roadblock and conduct stop and search. Can the EFCC PRO pls respond to this, this is very crucial.”

However, a statement by the Head of Media and Publicity in the Ilorin zonal office of EFCC, Mr Ayodele Babatunde, said it officers arrested the suspects in various parts of Ilorin metropolis on Tuesday.

The statement read in part, “Operatives of the Ilorin zonal office of the Economic and Financial Crimes Commission, on Tuesday, May 4, 2021, arrested 30 Internet fraud suspects, also known as Yahoo-Yahoo boys, in Ilorin, Kwara State.

“The suspects, who are mostly students, were arrested at different locations within Ilorin metropolis following actionable intelligence earlier received on their criminal activities.

“The suspects are currently being screened to establish their culpability and they will be arraigned as soon as investigations are concluded.” ,,

Related Topics:Kwara students
Up Next