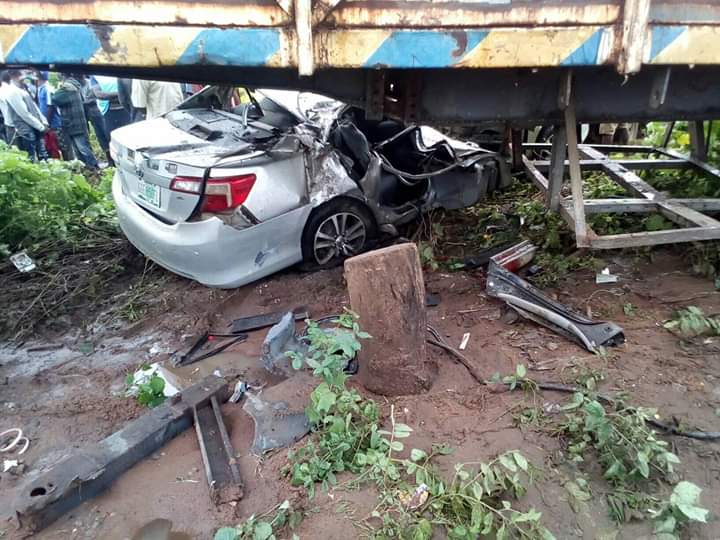 Vice-Chancellor of Ladoke Akintola University of Technology, Ogbomoso, Prof. Michael, has described as devastating the death of two students of the institution and a public secondary school pupil in an early morning auto accident in the Aroje area of the town.

It was gathered that five students of the institution were involved in the accident that occurred opposite the Bovas filling station.

Learnt that the five LAUTECH students were in a white Toyota Camry car when the incident happened.

The vehicle, which was driven in during a downpour, reportedly rammed into an articulated truck abandoned on the road.

Two of the students were said to have died on the spot, while the third victim, the pupil, was said to have been crushed by the car before it rammed into the truck.

Though the university had yet to release details of the victims, fellow students identified them as 400-level students, Seun, also known as ‘Young Prof’, and ‘Dr Sleem’.

Yunus, according to his colleagues, is currently in a state of coma in the hospital, while the other survivors were said to be responding to treatment.

The vice-chancellor said in a statement that he was personally involved in the rescue efforts.

He prayed God to give the university community the fortitude to bear the irreparable losses.

The statement by the institution’s Public Relations Unit read in part, “The Vice-Chancellor, LAUTECH, Ogbomoso, Prof. Michael Ologunde, who was personally involved in efforts at recovering the remains of the dead students, prayed that the Lord repose their souls and grant their parents and the entire university community the fortitude to bear these irreparable losses.”