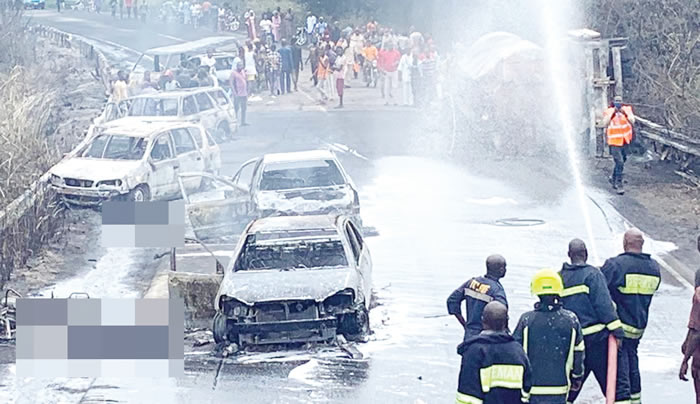 Not less than seventeen people have been confirmed dead and many others injured in different road accidents in Osun, Ogun, Delta and Lagos states, TopNaija reports.

The Osun crash occurred at Igbelajewa village, Erin Ijesa, after two trucks collided. The trucks, after the collision, which occurred along Ilesha-Akure Expressway, exploded as nine vehicles were caught up in the inferno.

The accident caused gridlock on the highway and led to diversion of traffic to Ipetu Ijesa/Eti Oni/Iperindo/Ilesha road.

Many commuters that got stranded spent several hours, as men of the Federal Road Safety Corps, Nigeria Police Force and Federal Fire Service, cleared the road.

A spokesperson for the Osun State Police Command, Yemisi Opalola, said the accident occurred around 11am on Monday.

The Public Relations Officer of the Federal Fire Service in Osun, Adija Basiri, said nine lives were lost to the inferno.

She said, “Our men responded to a distress call this morning after a collision between two trucks at Ilesa-Akure Expressway in Erin Ijesha, Osun State, resulting in a fire incident.

“Nine casualties were recorded, with one receiving treatment in the hospital. The fire affected nine vehicles and two trucks.”

The Governor of Osun State, Mr Adegboyega Oyetola, in a statement by the Commissioner for Information and Civic Orientation, Mrs Funke Egbemode, commiserated with the victims of the tanker explosion.

The statement said, “As a government, we are committed to ensuring that the lives and properties of citizens are protected and we will not relent in putting measures in place to ensure all-round safety for our citizens.

“We wish to assure residents of the area that relevant authorities will ensure that the required measures are put in place to bring back normalcy to the site.”

The Ogun accident occurred in the early hours of Monday around Saapade bridge, Ogun State end of the Lagos-Ibadan Expressway.

Umar said the accident occurred at 2.50am as a result of route violation and dangerous driving. According to him, the truck driver drove against traffic and had a head-on collision with the Mazda bus.

The FRSC boss added that six people were involved in the accident. He said four persons, three male adults and one female adult, died on the spot.

He noted that the deceased had been deposited at the FOS mortuary in Ipara. In Delta, two persons were killed in a fatal accident that occurred in the early hours of Sunday along the Ughelli-Warri Road.

Six others were said to have sustained serious injuries.

According to a witness, the 18-seater Toyota Hiace bus, belonging to the Zion Ark of Covenant International Bible Church Inc, was transiting from Oleh to Warri for a church service.

The witness said the driver had tried to avoid hitting an old woman who was crossing the road, when the accident occurred.

He noted that the driver skidded off the road and somersaulted, causing serious damage to the bus and injuries to its occupants.

“The bus, with the inscription, ‘No Harm Family’, had the number plate, EFR 837 ZQ, and was fully loaded with men, women and children. It was in a hurry to drop the passengers, before going back to Oleh to pick other church members who were waiting.

“The bus somersaulted and unfortunately, the two persons died on the spot, while over six occupants sustained serious injuries and were rushed to a hospital by good Samaritans,” he added.

The Public Relations Officer of the Federal Road Safety Corp, Mr Kenneth Ogbonna, did not take his calls or respond to text messages sent to him as of the time of filing this report.

In Lagos, a yet-to-be-identified driver and passenger lost their lives on Monday in an accident on the Third Mainland Bridge, inward the Iyana Oworo area of the state. The driver was conveying his passengers to a destination when the vehicle had a flat tyre.

The Head of Public Affairs, Lagos State Emergency Management Agency, Nosa Okunbor, who confirmed the deaths, said a passenger who survived the accident said the driver refused to listen when warned against speeding.

Related Topics:Osun tanker fire
Up Next