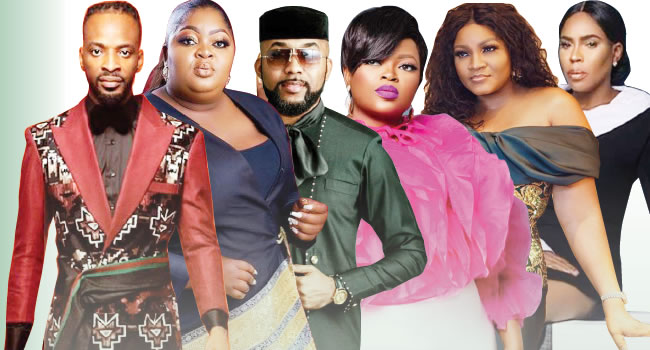 
Nigeria’s 2015 presidential election has been described by some as a watershed in the country’s chequered political history. It was the first time in the country that an opposition candidate would defeat the incumbent president at the polls. Prior to the elections, several celebrities supported the then-candidate of the All Progressives Congress, Major General Muhammadu Buhari (retd). Five years down the line, the stories have changed. Saturday Beats takes a look at how the entertainers involved have changed their minds

Not only did singer, Abolore Akande, aka 9ice, support the President, Major General Muhammadu Buhari (retd), in 2015, he was also an aspirant of the All Progressives Congress for the Federal House of Representatives seat in Ogbomosho North/Ogbomosho South/Orire Federal Constituency of Oyo State.

9ice also performed at some of the party’s rallies, especially in Oyo State. However, the singer is now disillusioned with his earlier choice. Some days ago, he told his followers that he was thinking of releasing a new song and asked them to assess a snippet of the song. He sang, “Ja (run)/Don’t let them deceive you no more/Go against every decision/Iku to n pa ojugba eni, owe lo n pa fun eni (The death that kills one peers is a proverb for one)/Osha bo le gbami, fimile bo se ba mi (An oracle that cannot help me should leave me the way it met me)/Ko ma ye won mo (They don’t know what they are doing anymore)/They wore uniforms before but now, they are wearing agbada…”

Shortly after the President’s national broadcast on October 22, 2020, the ‘

Gongo Aso’ singer had written, “I did not bother watching. I would have been disappointed, same as you are now #EndSARS.”

Actress, Ronke Ojo, popularly known as Oshodi-Oke, can be passionate when she’s talking about what is dear to her heart. Some may even tag it as being overzealous but she is wont to express herself freely when caught in a wave of emotions.

Shortly after the shooting of unarmed protesters at Lekki tollgate, Lagos, the busty role interpreter took to her Instagram page to express her displeasure over the incident. Wracked in sobs, Oshodi-Oke expressed regret that she supported the current regime during the elections, describing it as a wound on her conscience. She added, “I’m short of words because I was one of those that canvassed for votes. I campaigned for them (current regime).”

Actress, Iyabo Ojo, was one of the celebrities that lent her support to the APC for the presidential and other elections in 2015. Though she did not explicitly appear in any advert, she attended some of the party’s campaign programmes in Lagos.

However, Ojo has had to swallow her words as she strongly announced that she would ‘never’ support either of the two biggest political parties in the country― the People’s Democratic Party and APC. She wrote on Twitter, “I, Alice Iyabo Ojo, will never support, campaign or vote for any APC or PDP member ever again in my life even if you are my family or friend, we need a New Nigeria Flag of Nigeria, we need to stop recycling universal recycling symbol #EndBadGoverance.”

Bankole Wellington is not just a singer. He is also an actor, record label executive, politician, preacher and many other things rolled into one.

The artiste popularly known as Banky W had for a long time been telling his fans and Nigerian youths in general to get more involved in politics and socio-political issues. He took a bold step in 2019 when he became the candidate of the Modern Democratic Party for the Federal House of Representatives Eti-Osa (Lagos) seat.

In 2015, the entertainer featured in campaign materials for the then APC Lagos State governorship candidate, Akinwunmi Ambode. He appeared with the now former governor in a music video titled, ‘I Believe’.

In 2018, the singer was rumoured to have been paid N57m to support the reelection bid of the President, Major General Muhammadu Buhari (retd). But he debunked the stories on social media. A follower had tweeted at him, “Mr Wellington, come out and support Buhari with your chest. You can’t be non-partisan forever. Your company, EME, was converted to a public relations firm after it got a contract of N57m through one Abubakar Ahmed to promote Buhari. Why have you not been doing your work?”

Banky responded on Twitter, “False. Completely false and untrue. I have never met this person and never collected a dime to do anything for this President. I dare you to show proof of the false stories you are peddling. Why would I be running with an independent party in my own constituency if that was my plan?”

Popular actress, Funke Akindele-Bello, was part of the ‘I Believe’ music video for a former governor of Lagos State, Akinwunmi Ambode and APC candidate. Over the years, she has also appeared in different adverts for the state government.

However, the state did not consider all that when in April 2020 the actress and her husband were convicted of flouting the social distancing guidelines set out by the government to defeat the rampaging coronavirus. The couple was sentenced to 14 days community service and ordered to pay a fine of N200,000.

Reacting to the Lekki toll gate shootings, Akindele-Bello wrote on her Instagram page, “This is so sad. My heart is broken. Why shoot? This is too much, our leaders! #EndPoliceBrutality #EndSARS.”

She also posted a video of a woman in the northern part of the country who was hit by a stray bullet from the police and was practically in a vegetative state. The actress added the caption, “Sad! This is one of many heartbreaking stories of police brutality in our country, Nigeria! We won’t stop shouting. End police brutality in Nigeria. End bad governance. Justice must be served.”

Singer, Adekunle Temitope, aka Small Doctor, supported the re-election bid of the President, Major General Muhammadu Buhari (retd) in 2019. He even performed at the party’s national convention in Abuja.

However, Small Doctor decided to stand with fellow Nigerian youths as he took active part in the #EndSARS protests that rocked the country. He led a sizeable number of youths to demonstrate in the Agege area of the state. He also took his campaign to the church. He was pictured in a white garment, holding out a sign that read, “End police brutality’. He also posted pictures of the protests in other parts of the country.

After the Lekki shootings, he posted a picture of the Nigerian flag stained with blood.

In 2016, top actress, Omotola Jalade-Ekeinde, called on Nigerians to support the President, Major General Muhammadu Buhari (retd). She maintained that she was sure the president would do his job effectively. She had written on Twitter, “I am just going to say I believe the president; not until he, beyond doubt,  convinces us that he is actually not for our interests, I think I for now chose to believe him based on his past history.”

However, it is apparent that she no longer feels that way. In April 2019, the actress directed a tweet to President Buhari and Vice President Yemi Osinbajo. The tweet read, “The country under your watch is hellish! The lack of money in circulation coupled with the continuous assault and killings by uniformed men will make this country implode. It is unbearable. Do something. (There is) insecurity, fear and desperation everywhere.”

In reaction to the Lekki killings, she wrote, “Verified. Stop police brutality. End impunity. Who ordered the assault on the peaceful protesters?”

Days earlier, she had written, “Me and my clan went out. What a privilege to be a youth and in same generation with them. It has been a long time coming.”

Actress, Mercy Aigbe, actively took part in the #EndSARS protests, calling for an end to police brutality and she has expressed her displeasure with the current government.

However, as recently as December 2018, she was part of celebrities that were at the seat of power in the Aso Rock villa under the platform of the Buhari Support Organisation. The visit was part of BSO’s campaign efforts for President Buhari’s reelection.

She also supported the President in 2015 and in an interview she granted a soft sell magazine 2016, Aigbe maintained that she had faith in President Buhari to ‘deliver as promised’.

It is clear that the actress is not pleased with the country’s leaders at the moment. About a week ago, she wrote on social media, “I woke up very furious and sad! How the hell did we get here? Why in pete’s sake did we allow ourselves to be taken for fools for this long? So much impunity, oppression and intimidation. Our leaders are so insensitive. Whew! It’s going to be a long road to freedom.”

Actress, Faithia Balogun, teamed up with some of her colleagues to lend support to the election campaigns of a former governor of Lagos State, Akinwunmi Ambode, and President Muhammadu Buhari in 2015. Under the auspices of a group called the Unique Charitable Foundation, they endorsed the two candidates.

However, it seems the beat has changed. Some days ago, she took to her Instagram page to post a short drama of some people accusing politicians of not fulfilling their campaign promises. She added the caption, “What we need are leaders not rulers. Nigeria will be great.”

In another post, she wrote, “One question for the authorities. Are we still lazy? #EndSARS #Endtimeforthewicked #sorosoke.”

But some of her fans were not happy with the actress for supporting the current administration in the first place. Many expressed their displeasure in their comments on her page. A follower, @pweetie­_o, wrote, “Please, spare us. Your eye service is too much. We don’t need your sympathy. You have failed us. All your fans know; they are only trying to play along.”

In the heat of the Lekki shootings, actress and comedian, Eniola Badmus, was rumoured dead but to the relief of many Nigerians, she quickly debunked the false stories. However, she was involved in the #EndSARS protests and she even called on international celebrities to lend their support to the cause. She constantly posted about the protests and demanded an end to ‘bad governance’.

Meanwhile, she was part of the celebrities that supported the current administration. In 2019, she was at the Tafawa Balewa Square, Lagos, where she adorned an APC-customised dress and campaigned for the party and its candidates, including President Buhari.